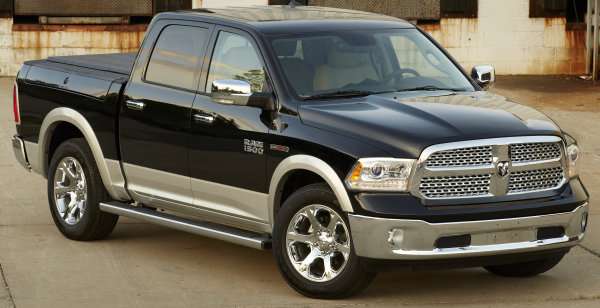 The folks at Motor Trend have just announced their Truck of the Year award for 2014 and for the second straight year, the Ram 1500 is the top dog – marking the first time that a truck has ever won the Motor Trend award two years in a row.
Advertisement

To become the first ever back to back winner of the Motor Trend Truck of the Year award, the 2014 Ram 1500 had to beat out an impressive list containing some very strong competition. The Ram Heavy Duty and Ram ProMaster vans were among the vehicles considered along with the Chevrolet Silverado, the GMC Sierra, the Toyota Tundra, the Ford Transit Connect, the Mercedes-Benz Sprinter and the Nissan NV200. Each of these 9 vehicles were shipped to the Continental Tire Automotive Proving Grounds in Uvalde, Texas where they were evaluated in the following tests:
1. Standard testing (without load): 0-60 mph and 1/4-mile acceleration, 60-0 mph braking, and maximum lateral grip.
2. Limit handling (without load): closed-course cornering, braking and acceleration.
3. Tow/payload testing: 0-60 acceleration repeated with trailers attached (pickups) or payload secured (vans), loaded to 75 percent of each truck’s maximum rating (as equipped)
4. Road looping: Highway and real-world replication.

A big part of the Ram 1500 winning the 2014 Motor Trend Truck of the Year was the new 3.0L EcoDiesel V6 mated to an 8-speed automatic transmission. The folks from MT found that this truck was comfortably capable of towing 9,200 pounds while also being the most efficient vehicle in the shootout. Through all of the extreme testing at the Continental Tire Automotive Proving Grounds, the Ram EcoDiesel boasted real world fuel economy of 15 miles per gallon and during the testing on a drive loop – and under less grueling conditions – the new half ton diesel Ram pickup hit 19mpg in the city, 26 on the highway and 21mpg combined in a truck with four wheel drive and a steep 3.92 rear axle. Another EcoDiesel Ram 1500 with a 3.55 rear axle and rear wheel drive only returned real world numbers of 18 in the city, 28 on the highway and 22mpg combined.

“For 2014 we had a large and highly competitive field of contenders for Motor Trend's Truck of the Year," said Edward Loh, Editor-in-Chief of Motor Trend. "At the end of the day, though, the Ram 1500 quickly rose to the top. Not only did it withstand our rigorous testing, it thoroughly impressed our judges with its vast array of standard and optional equipment, and, most notable, its fuel-efficient, segment-exclusive EcoDiesel V-6. With 420 lb-ft of torque and up to 28 ‘Real MPG’ highway, the EcoDiesel is a true game-changer. In fact it helped make Ram 1500 the Motor Trend 2014 Truck of the Year – and the only consecutive winner in the history of the award.”

It will be interesting to see how the rest of the major awards for 2014 pan out as we hit the 2014 North American International Auto Show where the 2014 North American Truck of the Year will be announced. The Ram 1500 took the honors in 2013 but there are no Ram brand products on this year’s short list so the awesome new Ram 1500 won’t be claiming back to back titles with the North American award jury. Even with that in mind, being the first back to back winner of the Motor Trend Truck of the year is a big honor and a big deal for the growing Ram brand. Earlier this year, the Ram lineup dominated the Truck Truck Rodeo with the Ram 1500 taking top honors there as well.

"Half-ton truck customers have been asking for a diesel engine and Ram is the only truck manufacturer to answer the bell and deliver not only best-in-class fuel economy but also 9,200 pounds of towing capability," said Reid Bigland, President and CEO Ram Truck Brand, Chrysler Group LLC. "In a brutally competitive truck industry, the Ram 1500 is the only vehicle to ever win the Motor Trend Truck of the Year award two years in a row, reaffirming the fact that we have the best truck on the road."