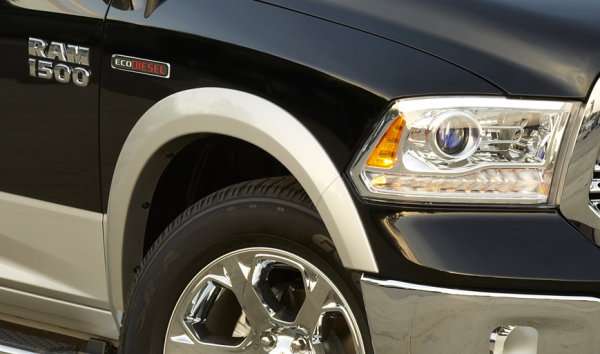 I recently had a chance to spend some time driving the new 2014 Ram 1500 EcoDiesel and while some delays have caused critics to question if there have been some development or production problems– I am here to testify that the EcoDiesel is primed and ready to take on the half ton truck segment.
Advertisement

The 2014 Ram 1500 EcoDiesel will hit US Chrysler Group dealerships as the first modern half ton pickup to offer a powerful yet efficient diesel engine and considering the massive success of the Ram Heavy Duty diesel options over the years, it came as no huge surprise to hear that Ram would be the first automaker in the US market to offer a diesel half ton pickup. However, where many Mopar fans expected the Ram 1500 to someday pack a smaller displacement Cummins Turbo Diesel – the Ram EcoDiesel package instead draws its power from a 3.0L turbo diesel built by Fiat subsidiary VM Motori.

The VM Motori 3.0L turbo diesel V6 in the 2014 Ram 1500 offers 240 horsepower and a whopping 420lb-ft of torque and as soon as I began driving the EcoDiesel Ram, that torque was very, very apparent. The variable vane turbocharger helps to cut down on the dreaded turbo lag – the time between the point as which the driver asks for more power and when the turbocharger spools up enough to provide all of the advertised power – whether you are launching from a stop or looking to accelerate quickly on the open road. There is a very brief period of time when you launch from a stop where the engine is working to reach its peak torque output but when it does, it puts you back in the seat hard…provided that you can get traction. Whether I rolled out gently and then hammered the throttle or just plain launched hard, the second that the engine hit peak torque it immediately spun the rear tires without any real effort. I’d bet that if you turned the traction control off, this EcoDiesel half ton pickup would do some absolutely monstrous burnouts…but that wasn’t part of the docket during my test session. Once the rear tires got past their stint of spinning, the EcoDiesel pulled very hard as the 8-speed automatic transmission quickly popped from gear to gear without any hesitation.

It shouldn’t come as any surprise that the new Ram 1500 EcoDiesel with 420lb-ft of torque and an aggressively geared 8-speed transmission offers great acceleration at pretty much any speed but what is impressive is how much this turbo diesel isnt like the Cummins Turbo Diesel mills that power the Ram Heavy Duty lineup. Like many other heavy duty diesel truck engines including the Ford PowerStroke, the Cummins sounds and smells like a diesel truck whether you are at idle or at wide open throttle. On the other hand, the Ram EcoDiesel is quite enough under any circumstance that the average person isn’t going to notice any additional noise and unless you are standing next to the tailpipe, there is no “diesel stink”. There also aren’t any excessive tailpipe emissions so buyers of the EcoDiesel won’t have to worry about any black soot – at least not in stock form. In short, some American consumers shy away from the suggestion of diesel engines because they expect all powerful diesel truck engines to be noisy, smokey and smelly but the Ram 1500 EcoDiesel doesn’t come with any of those problems.

While consumers may avoid a light duty diesel because of concerns about the noise and odor, Ram engineers facing these demands for a diesel Ram 1500 had very different concerns – mainly in the added weight of the prospective diesel half ton engine. An engine as heavy as the Cummins Turbo Diesel would not only require extensive suspension and chassis modifications, that added weight would also cause the truck to handle very poorly with so much of the curb weight located over the front wheels. Fortunately, the 3.0L EcoDiesel only weighs about 50 more pounds than the 5.7L Hemi so the Ram 1500 EcoDiesel doesn’t feel any heavier than the Hemi Ram whether you are cornering, accelerating or braking.

As for the calibration issues that have been rumored to cause the push back in the dealership launch of the 2014 Ram 1500 EcoDiesel, I didn’t experience anything during my drive time that suggested any sort of problems. The truck offered great power in every on-road situation and it didn’t come with any of the negative stigmas that are applied by the consumer world or the engineering front.

Ford has been bragging for years about the success of their range topping EcoBoost V6 and with the introduction of the Ram 1500 EcoDiesel – the Ram brand will also have a powerful V6 mill that will likely offer vastly better fuel economy numbers than anything on the market today.