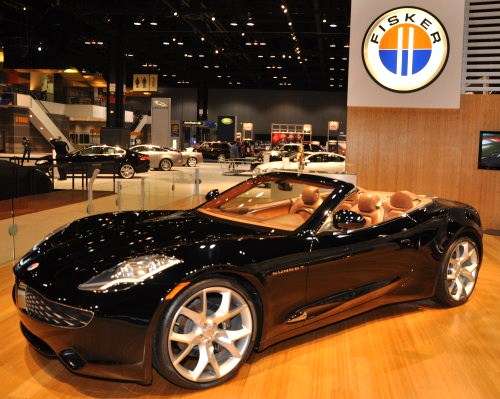 Production of the Fisker Sunset Convertible confirmed in Frankfurt

Many expected that the new Fisker Surf shooting brake would be the big Frankfurt Motor Show news from the US-based automaker but we have also learned that when the Surf hits the streets in 2013, it will be joined by the Fisker Sunset – a convertible based on the architecture of the Fisker Karma sedan currently amidst production.
Advertisement

The Fisker Sunset Convertible made its debut as a concept at the 2009 Detroit North American International Auto show to positive reviews but the topless hybrid seemed to fade into the background while the production of the Karma sedan and Project Nina took most of the Fisker limelight. However, based on comments made by company CEO Henrik Fisker, we know now that the sleek hybrid convertible concept will be reality when the Fisker Sunset hits the streets in 2013.

The Fisker Karma sedan was designed with the goal of offering the overall form of a coupe with the capabilities of a sedan so it should come as no surprise that the 2-door Sunset Convertible looks great wearing a similar exterior skin as the 4-door Karma. From front to back, the Sunset looks nearly identical – aside from the fact that it doesn’t have a top and it has two large doors in place of the four smaller doors on the Karma. Inside, the Sunset has an interior layout that owners are going to want to show off, looking like nothing less than a premium luxury car with high quality, mutli-tone leather appointments accented with satin silver trim pieces throughout.

The key feature of the Fisker Sunset (aside from the sleek exterior and luxurious interior) is the Fisker Q Drive drivetrain that uses an electric drive motor mated to a turbocharged 4- cylinder for a total output of 403 horsepower and 981lb-ft of torque (available from 0rpm!). The drop-top Sunset could weigh a little more than the Karma with the controls for the top and the added structural supports in place of a roofline, but if the company can preserve the capacities of the Karma sedan, the Sunset will be able to travel around 50 miles on pure electric while the range-extending gasoline engine pushes the top range over 300 miles. Also, when shifted into sport mode, the Sunset could see 0-60 times in the low 6-second range so it can provide the fun of a sports car with the fuel economy of a modern hybrid.

No pricing was offered on the 2013 Fisker Sunset Convertible but the company plans for this topless model to be their halo vehicle – meaning that we can expect it to cost slightly more than the more sensible Karma sedan and Surf shooting brake. The Surf has also not been priced but with the Karma ranging from $95,900 to $108,900 (US dollars), we can expect the wagon to range slightly above that while the topless Sunset ranges somewhere above the Surf…so we can probably expect the Fisker Sunset to start somewhere around the $100k mark.

Have a look at the gallery on the right for a closer look at the Fisker Sunset and check out the links below for other 2011 Frankfurt Motor Show news.