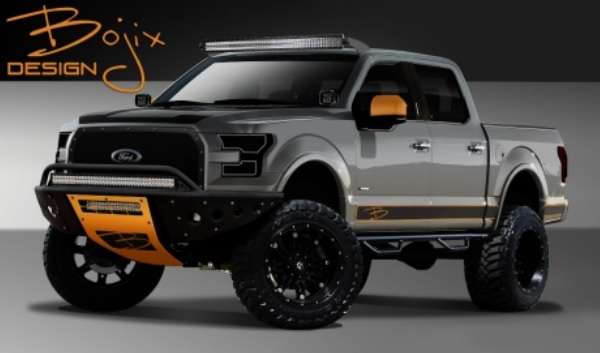 Last week we brought you the first preview of a customized Ford F150 headed to the upcoming 2016 SEMA Show in Las Vegas and while that truck was built to rule the street – today’s SEMA-bound F150 has been built by Bojix Design to dominate the dirt.
Advertisement

When the 2016 SEMA Show opens on November 1st, we can expect that Ford Motor Company will have one of the biggest displays in the sprawling Vegas event – if not the biggest. Ford will surely bring out a collection of old and new customized vehicles from across the lineup, but we can expect that the Ford Mustang and the Ford F150 will be the most well represented vehicles in the Blue Oval area.

Ford has been kind enough to offer brief information and artwork teasing some of the customized vehicles which will be on display at the 2016 SEMA Show and over the past week, we have brought you an early look at a pair of 800+ horsepower Mustang GTs and a lowered F150 with 750 horsepower, but today, we bring you a look at a new F150 show truck with a very different theme than the first F150 we saw.

The Bojix Design 2016 Ford F150
Like the low-riding, supercharged F150 we brought you last week, the Bojix Design F150 is based on the F150 SuperCrew, but that is like the last similarity between these two great looking SEMA show trucks.

The Bojix Design F150 is a high riding 4x4 pickup with the 3.5L EcoBoost V6 rather than a rear-drive with a V8, and while this twin turbo V6 has been modified with a pair of larger turbochargers, a Full Race intake system, a new exhaust system and a new intercooler – we don’t get any power numbers. That being said, I would expect that the Bojix Design F150 makes far more power than the 375 horsepower and 470lb-ft of torque offered by a stock 2016 F150.

To add lots of ground clearance, the Bojix Design F150 has a Ready Lift 7 inch lift kit with Fox Racing coilover shocks and to help tackle any footing, this big half ton truck has 22 inch wheels wrapped in 37 inch Nitto M/T rubber. Finally, this F150 has a front and rear high performance braking system from Brembo, helping it to get stopped from the speeds which come with the built EcoBoost engine.

Once Bojix handled the power, handling performance and braking, they turned their attention to the exterior of this 2016 Ford F150. The modification list for the exterior and interior are so extensive that rather than writing them all out, I have included the list from Ford below.
Based on the mod list and this sole image, the Bojix F150 should most certainly be one of the most eye-catching pickups in the huge Ford display.

Tesla Giga Berlin's New Hurdle: It's Not Only the Gov't, but Now Tesla Itself
Teslas Are Sold Out Until 2023, But The Timing May Reverse
END_OF_DOCUMENT_TOKEN_TO_BE_REPLACED