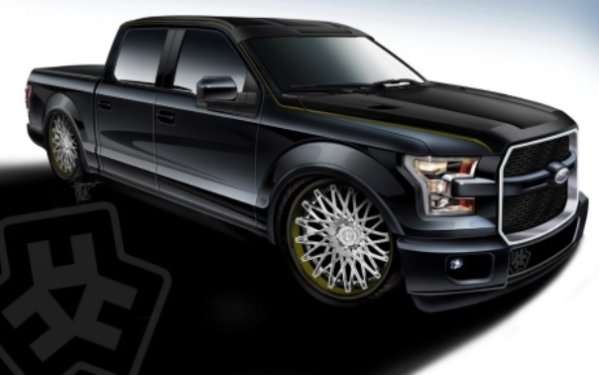 A Preview of the Hulst Customs Ford F150 Headed to SEMA

Ford Motor Company has offered up artwork and brief details on a few of the F150 pickups which will line their sprawling display at the 2016 SEMA Show and today, I bring you a look at the high performance street machine built by Hulst Customs.
Advertisement

While I like all sorts of trucks, my love of drag racing leads me to prefer a pickup built to lay down stunning quarter mile times, so when previewing the Ford F150 pickups headed to SEMA, I have picked the sole on-road performance truck. While we will bring you a look at the other Ford F150 pickups which will be on display at SEMA, I will start with my favorite of the group based on the available information – the F150 built by Hulst Customs.

This truck began its life as a routine 2016 Ford F150 SuperCrew with the 5.0L V8. Hulst started under the hood, adding a Whipple supercharger and a CGS Performance cat back exhaust system, lifting the output up to a whopping 750 horsepower. Next, to make room for the huge 26 inch Lexani wheels, Hulst equipped this F150 with one of their own Air Suspension setups featuring a custom 4-link setup out back and custom front suspension brackets, all of which allowed them to get the slammed looked shown above.

Finally, once the suspension and engine modifications were done, this F150 was fitted with a new bumper cover, grille, hood vents, front splitter, lower side sills, rear bumper and badges on the outside along with Katzkin leather seats and unique infotainment goodies on the inside.

While this Ford F150 probably wouldn’t serve much of a purpose in a working setting, the 750 horsepower V8 and the low-riding nature should make this one wicked-fast performance truck on the drag strip – and maybe even a road course.

However, speculation can be put aside, as this Ford F150 has been built to turn heads on the floor of the Las Vegas Convention Center at the SEMA Show – and I’m sure that it will do just that.

Stay tuned for more previews from Ford Motor Company and the rest of the automakers displaying at the 2016 SEMA Show in Las Vegas!