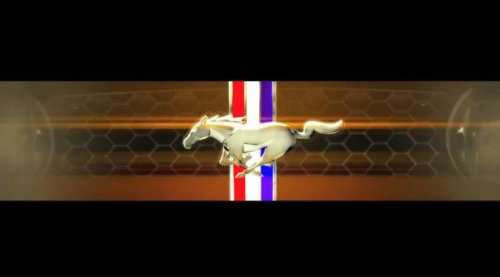 Ford of Europe issued a brief, yet harmonically exciting, video this morning that officially announces the arrival of the mighty Ford Mustang in the European market as part of a new product lineup that will introduce 15 new or restyled vehicles in the next 5 years.
Advertisement

This video which is aptly titled “Ford Mustang coming to Europe” features 27 seconds of shadowy images of the Mustang grille and fog lights that really do not provide much information. In the background, there is a sound track of hard revving engines – presumably the various Mustang engines that will be offered for the European market – capped off by the sound of a Mustang accelerating off into the distance.

Unfortunately, there has been no information offered yet as to when the Ford Mustang will arrive in Europe but rumors suggest that the Mustang will arrive in Europe after the next generation is unveiled in the United States. The next generation Mustang, which is expected to commemorate the 50th anniversary of the famous pony car when it is unveiled in April of 2014, is expected to feature a new design that is more attractive in the global market – rather than just American buyers. Some have used the phrase “European styling” in reference to the next generation Mustang and the suggestion of a Euro-designed Mustang has caused some die hard enthusiasts to cringe. Luckily, Ford Motor Company has been quick to state that the next generation of the famous American performance car will be all American in every way.

The Chevrolet Camaro is available in select European markets but only in what Americans would recognize as the Camaro SS, packing the 6.2L V8 engine with either an automatic or manual transmission. The new Ford of Europe video definitely sounds like there are multiple engines revving so I am led to believe that the Ford Mustang could be offered in multiple forms, unlike the Camaro. One of the key criticisms of the European Camaro is the high price, which is due in part to the fact that the Camaro is really only offered as what Americans know as a loaded up SS model which carries a price in the US up in the range of $40,000. When you factor in markups and all of the other costs associated with selling an American muscle car in Europe, the price of the Camaro starts around $56,000 US Dollars. However, if Ford was to market the entry-level Mustang V6 in addition to the Mustang GT – Ford would likely have a massive price advantage that would allow the Mustang to appeal to far greater numbers of buyers.

Ford is working hard to offer the same basic lineup around the world so I wouldn’t be incredibly surprised to see the Mustang V6, Mustang GT and even the Shelby GT500 available in Europe when it arrives over the next few years. Should Ford offer all three forms of the Mustang, I would expect that General Motors will counter and increase the options available on the Camaro – including a lower entry-level price. In any case, the fiery battle between the Ford Mustang and the Chevrolet Camaro is about to spread to more countries across Europe while the two continue to go back and forth on domestic soil.

While the news from Europe suggests that Ford Motor Company will wait until the next generation to launch the Mustang in Europe, it will be interesting to see if the Motor Company launches the Mustang in its current form to help drive interest in the next generation. In any case, hopeful Ford Mustang buyers will be able to drive their favorite American muscle car without the high costs of importing a vehicle from the US and having it upfitted for European use.

Enjoy the video below and make sure that your speakers are turned up so that you don't miss out on the symphony of American iron - courtesy of the Ford Mustang.

Sean Kelly wrote on September 16, 2012 - 12:21pm Permalink
Oh what i`d do for one of these. Drooling like a baby teething watching this.

Tesla Contemplates A New Strategy for China Retail even As Sales Boom
Jay Leno on Elon Musk & EVs: “I Think He Should Get ... Credit"
END_OF_DOCUMENT_TOKEN_TO_BE_REPLACED