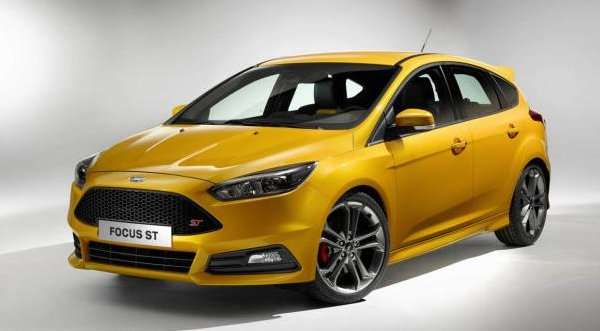 Ford Motor Company recently introduced the new Focus ST with a new high performance diesel engine and while that powerful little oil burner isnt strong enough to power the newest Ford Mustang – that new Focus ST engine option could offer a first look at a performance oriented diesel that could end up under the hood of the S550 Ford Mustang.
Advertisement

A few months back, the discussion came up about the possibilities of a 2015 Ford Mustang Diesel and I called it globalization gone too far. I wasn’t too keen on the idea of a diesel powered Mustang and while some people agreed with me, others fired off on me as though I was the dingo which stole their baby. It is clear that there are some people in both the US and overseas markets who think that a diesel Mustang would be a perfectly good idea and while I am still on the fence, the introduction of the new Ford Focus ST Diesel in Europe stokes the fire under the diesel Mustang discussion once again.

Ford Motor Company has put a tremendous amount of effort into spreading the excellence of EcoBoost technology across the American and European vehicle lineups, but Ford hasn’t been as quick to adopt diesel technology to us vehicles outside of their brawny Super Duty pickups with enough emphasis for the diesel enthusiast crowd. The introduction of the European-bound 2015 Ford Focus ST Diesel shows that the Motor Company has an eye on the performance diesel market. Right now, this peppy little diesel is likely only going to be sold in Europe – but this engine could lead to a similar engine in the Ford Mustang in the future.

2015 Ford Focus ST Diesel
The 2015 Ford Focus ST that was introduced in Europe last week with two engines – the 2.0L EcoBoost that we already enjoy here in the US and the new 2.0L turbo diesel engine. The EcoBoost engine offers 252 horsepower and 270lb-ft of torque while the 2.0L turbo diesel offers just 182 horsepower and 295lb-ft of torque. The EcoBoost Focus ST rips from 0-62 miles per hour in 6.5 seconds en route to a top speed of 154 miles per hour while the diesel ST is a touch slower in both categories – hitting 62 in 8.1 seconds with a top speed of 135 miles per hour. The key advantage with the new diesel engine is that the oil burning Focus ST is about 50% more fuel friendly than the gasoline powered Focus ST, delivering 64.2 miles per gallon for the diesel compared to 41.5mpg for the gas engine based on European numbers (which differ greatly from our own fuel economy standards).

Any Diesel Ford Mustang Engine Would Be Much Stronger
It is mighty impressive that the 2015 Ford Focus ST Diesel can offer more torque than the gasoline models while achieving far better fuel economy – but a drop in power in a performance model like the Focus ST would be a hard sell in the US market. Unless it was considerably less expensive than the EcoBoost model with 252hp, the 182hp 2.0L diesel would almost certainly struggle in the US as an option for the Focus ST. Based on that it would most certainly be frowned upon if the Ford Mustang was powered by a 2.0L diesel engine with only 182 horsepower and 295lb-ft of torque even though it is far more efficient. However, this new Focus ST Diesel could be the first of a string of performance oriented diesel engines and one of those could end up under the hood of the mighty Mustang.

Much in the same way that the 2.0L EcoBoost engine in the Ford Focus ST previewed the 2.3L EcoBoost engine that will power the 2015 Ford Mustang, this new 2.0L diesel could preface a larger diesel engine for the Ford Mustang down the road. Were to Ford introduce something like a 2.3L turbo diesel based on the Focus ST engine with horsepower in the 250-270hp range and torque in the 350-400lb-ft range, that would be a far more fitting engine for the Mustang in terms of power, while also offering what would almost certainly be the most efficient muscle car ever. Figure that in the European market, the ST Diesel is 50% more fuel efficient than the ST gas engine so if the diesel engine in the Mustang was even “only” 33% more efficient than the 2.3L EcoBoost, it would offer somewhere around 40 miles per gallon.

That’s 40 miles per gallon from a Ford Mustang with 400lb-ft of torque.

I still don’t think that a performance oriented 4-cylinder turbo diesel-powered will dominate the US market any time, but the outcry over my last opinion piece about the idea proved that there are definitely people out there who are interested – both here in the US and abroad. Of course, this might not happen for the 2015 model year as the new look and the EcoBoost 4 are the big headlines...but this new Mustang could be the first to rely on diesel power if some of our readers have their way.

Parks McCants wrote on July 9, 2014 - 12:30am Permalink
I've owned several domestic and import diesel-powered cars and trucks, Dodge Cummins, Isuzu and Mercedes.My first, a Mercedes 220 D was upgraded to a 300 Turbo D wagon and in later years a 300 SEL Turbo D big body. The last Mercedes in my stable clocked 300,000 trouble-free miles on the O.D. before being handed down to a nephew. The Isuza Pup, was a solid runner and served as just that, on a construction crew. When I sold the company in 07' the Isuzu had 20,000 + hours on the motor and trans. Again, maintenence and tire rotation(replacement)only. Last season I let my prized 1996 2500 Dodge Turbo Diesel go back to the farm. It had 230,000 miles on the O.D. and didn't burn a drop of oil. It would always start on the first crank. Again: The only required attention to this vehicle was maintenence. That's the glory of diesel technology. The 5.8 Liter 6 cylinder Cummins in the Dodge had been set up to tow 12,500 lbs.. A 4 inch exhaust and Fram intake air filter increased the torque to 580 lbs without installing larger injectors. This truck weighing in at 8300GVW would average 22 mpg empty and 14-16 mpg fully loaded... Now, looking to clean burning technology:The last Whisper Watt Isusu Powered Diesel generator opperated by Masterplan Construction (my company) utilized " clean burning" diesel technology. It was CARB compliant without the use of a catylitics. The problem with Diesel in the U.S. is the inflated price of the fuel due to restricted refining capacity. Europe: 55% of all vehicles in the E.U. run on diesel fuel. Thus, Ford will answer the call for a clean burning diesel fueled Focus in Europe. The engines are fantastic. The U.S. fuel suppliers must step up the production of refined road grade diesel fuel. Lower maintenence, low emissions... Thanks for the informative read.