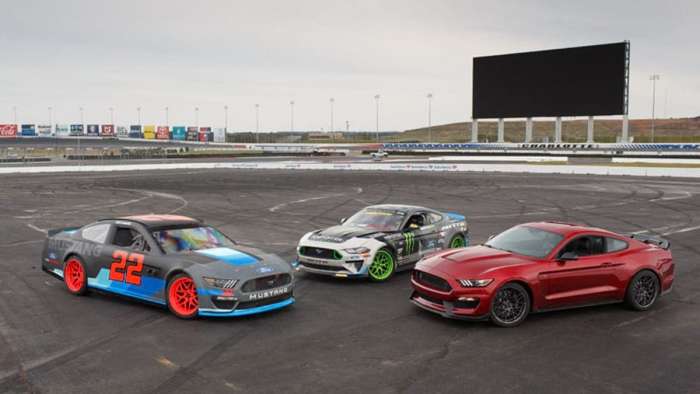 Ford Performance introduced the world to the 2019 Ford Mustang race car that will participate in NASCAR’s Monster Energy Cup Series next year, marking the first time that the Mustang and Camaro will go head-to-head in the association’s big leagues, and it actually looks like the production car – up front, anyway.
Advertisement

We have known for some time now that 2019 would mark the Ford Mustang’s debut in NASCAR’s Monster Energy Cup, but earlier this week, the Motor Company rolled out the first moving footage of the new race car. They did so with help from 2018 champion Joey Logano and drift legend Vaughn Gittin Jr, who drives the customized Mustang shown in the picture above in the middle, with the two Mustang racers sliding side-by-side around the tight track.

As you can see, they also staged the new NASCAR Mustang with Gittin’s drift racer and a production GT350, showing how similar the new race car is to the road car. Considering how long NASCAR had used what were more or less the exact same bodies with stickers and paint jobs being the only difference, it is nice to see the race cars taking more of a resemblance to the road cars on which they are based. Mind you, the back ends are still much flatter than the production car, but the front end sculpting definitely appears to be similar to the modern Shelby Mustang.

Mustang Versus Camaro
In the world of American performance cars, there is no battle that has been going on longer and across more different forms of motorsports than that of the Ford Mustang and the Chevrolet Camaro. For ages, Mustangs and Camaros have been dueling on the streets, the drag strips, the road course and even in NASCAR’s smaller associations, but 2019 will mark the first time where the two will go head-to-head in what old timers know as the Winston Cup.

Best of all, this rival comes to NASCAR at a point in time where the association is trying to bring more viewers to the sport. Over the past decade, critics of the move to cars that were nothing like stock cars strayed, as did those people who didn’t like the fact that every car was basically the same with the exception of the paint job. After all, the series had been founded ages ago by people racing actual production cars on the sandy beaches of Florida, and by the 2000s, we had sedans shaped like coupes racing in NASCAR.

Not surprisingly, some fans didn’t love the idea of watching a Chevrolet Impala, a Ford Fusion and a Toyota Camry race and of course not – that sounds ridiculous. It got a little better when Chevy started using the Holden Commodore-turned-SS sedan, but again, it was a coupe-shaped race car version of a sedan and it was racing against the Ford Fusion and the Toyota Camry. It sounds like a day in the mall parking lot.

However, as NASCAR has softened its grip on making the cars all wear the same exterior shape, we have seen the Chevrolet Camaro ZL1 enter the scene and now the Ford Mustang in Shelby GT350 form will arrive for 2019. If nothing else, there is far more marketing appeal of watching a Mustang and Camaro race a Camry, and both Ford and Chevy are bound to attract some hardcore muscle car fans.

The Shelby Look
As you can see in the image above, the #22 Ford Mustang that will be driven by Joey Logano, the front end sculpting appears to be similar to the current Shelby GT350 Mustang, as does the shape of the hood. The new NASCAR racer even appears to have similar wheel opening flares, making the back end the only aspect of the race car that isn’t shaped like the road car.

The new NASCAR Mustang will make its on-track debut at the events preceding the 2019 Daytona 500, but in the meantime, check out the video below for footage of the two very different Mustang race cars in action together.