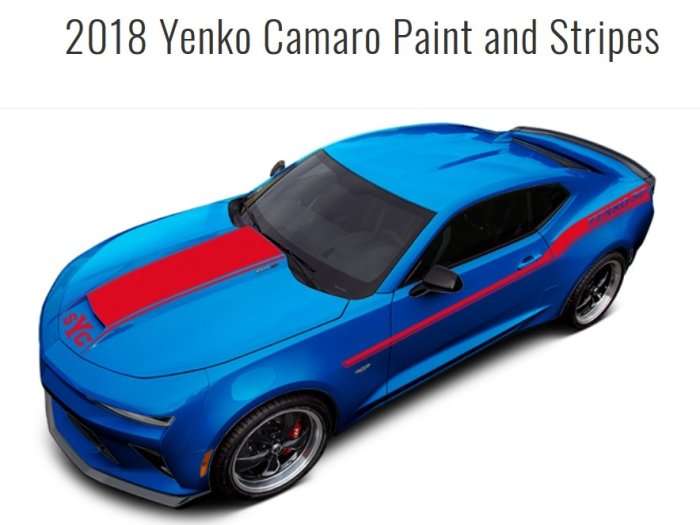 The modern-day Yenko Camaro from Specialty Vehicle Engineering now has a Stage II package that lifts the output of the 455-horsepower LT1 up to 1,000 horsepower – but we don’t know the price and only 25 units will be made.
Advertisement

The Yenko/SC Stage II Camaro
Like the Yenko/SC that we talked about last year, the heart of the Stage II package is under the hood. The 6.2-liter LT1 has been removed and stroked to 6.8 liters (416 cubic inches), fitted with a forged bottom end, ported LT4 cylinder heads, long tube headers and a new high-output supercharger system. With the help of a high-flow fuel system, the 6.8-liter Stage II engine delivers 1,000 horsepower and 875lb-ft of torque.

This package is being offered strictly on the 2018 Camaro SS 1LE with the 6-speed manual transmission, so in addition to that monster engine, the Yenko/SC Stage II has all of the standard high-performance features from GM – such as the Magnetic suspension system and the big Brembo braking system. SVE does add unique wheels wrapped in Michelin Pilot PS4S tires measuring 305mm out back.

Of course, the Yenko/SC Stage II Camaro comes with all of the interior and exterior upgrades of the original package from SVE, so things like the custom carbon fiber hood, the stripes, the badges and the custom paint/stripe options are all included with the 1,000-horsepower package.

Unfortunately, we don’t know how much the 2018 Yenko/SC Camaro Stage II will cost, but we do know that the original 2017 Yenko/SC package with 800 horsepower had a package price of $40,000. That does not include the cost of the Camaro, so getting into the 2017 model would have cost you at least $78,000.

Figure that the Stage II package could cost a bit more, even though the components are similar, due to the higher output. If the company chose to charge $45,000 – or $5,000 more for the extra 200 horsepower – that would seem reasonable. However, with this package being built on the SS 1LE, the base car on which the Stage II package is built has an MSRP starting at $44,995. When coupled with the possible $45,000 MSRP of the package, the 1,000 horsepower Camaro would have an assembled price around $90,000. Of course, if the package costs more than $45k or requires other options, that base price could easily rise up to the six-figure mark.

In the long run, the Yenko/SC Stage II Camaro isn’t for the average gearhead, but for someone who has deep pockets and the desire to own a rare and extremely powerful post-title muscle car – this is a great option.