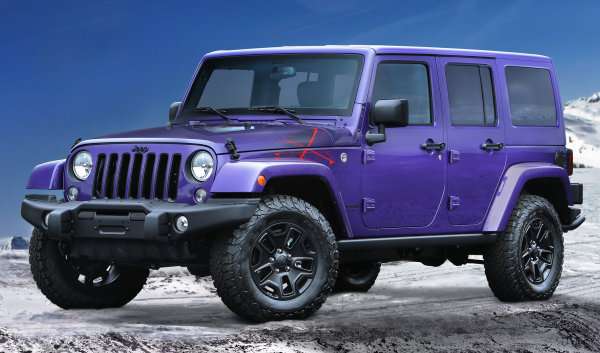 The Chrysler Group has used the 2015 Los Angeles Auto Show to show off the newest package for the Jeep Wrangler, and along with the Plum Crazy-like Xtreme Purple exterior hue, the new Backcountry package will include a list of standard features that will most certainly resonate well with the legions of rabid Jeep fans and casual new-SUV shoppers alike.
Advertisement

Leading up to the start of this week’s 2015 Los Angeles International Auto Show, we had already talked about the 2016 Jeep Grand Cherokee SRT Night, but joining that blacked-out high performance SUV is the new Jeep Wrangler Backcountry. Over the past few years, the Jeep Wrangler has had a collection is simple upgrade packages that added unique aesthetic touches inside and out, while also adding some useful content for those who like to get their Jeep a little dirty. The Backcountry is the newest in that list, joining prior packages such as the Islander, the Freedom Edition, the Polar Edition, the Moab Edition, the Call of Duty MW3 Edition and several others, so while this isn’t exactly a new trimline, it builds extensively on a current trimline with popular items from the accessory and option lists.

The package is simple, but if you love Plum Crazy – or Xtreme Purple as it is called in the Jeep showrooms – the 2016 Wrangler Backcountry is your only option. There is no pricing announced just yet, but considering the relatively simple modification list, it shouldn’t be all that much more expensive than the standard Wrangler Sahara.

Click here for a closer look at the Jeep Grand Cherokee SRT Night, which is debuting alongside the Wrangler Backcountry at the 2015 LA Auto Show, which started today and runs through next week.