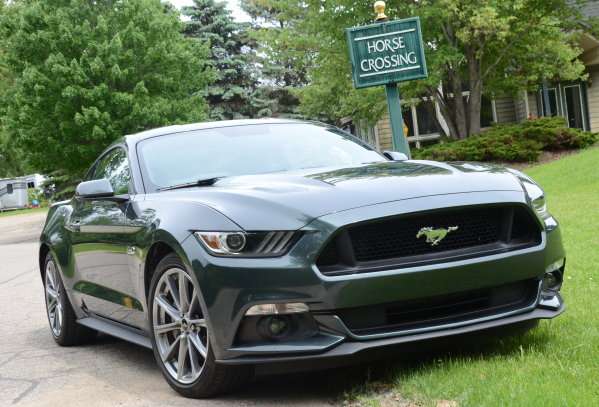 Even though sales were down across the entire muscle car segment, the new Ford Mustang continued to post gigantic sales numbers – once again crushing both the Chevrolet Camaro and Dodge Challenger in June 2015 sales.
Advertisement

An odd thing happened in June 2015, as all three of the American muscle cars saw their sales numbers dip from the month before, but that stop the Ford Mustang from still posting very impressive monthly sales numbers. The Dodge Challenger and the Chevrolet Camaro both posted strong sales numbers in June, but with the massive wave being ridden by the 2015 Mustang, Ford’s new muscle car comfortably outsold the cross-town rivals.

Mustang Dominates June
In June 2015, Ford Motor Company sold 11,719 examples of the new Mustang. While that number was more than enough to crush the Camaro at 8,611 units and the Challenger at 6,845 units. June was actually the worst of the past four months for the Mustang, with only January and February having lower Mustang sales numbers. This is odd, considering that June has been a strong month for Mustang sales over the past few years, but that is generally the case for all of the muscle cars and in this June, everyone was down compared to the month before.

First Half, All Mustang
Regardless of comparisons to prior months, June 2015 was still a good month for the Ford Mustang, capping off the strongest first half of a year for the Mustang in years and allowing the original pony car to lead the segment each and every month. Through the first six months of 2015, Ford has sold 68,290 new Mustang fastbacks and convertibles. During the first half of 2014, there were just 44,231 Mustangs sold, so the arrival of the next generation model has accounted for an increase of almost 50% in the first half of 2015.

That is a pretty clear sign of success with the next generation Ford Mustang.

Challenger Remains Strong
While the Dodge Challenger was no where close to competing with the Ford Mustang in June 2015 sales, the brawny Mopar muscle car continues to post near-record sales figures each month. Like the Mustang, the Challenger is benefitting from a new generation vehicle, including the mighty Hellcat Challenger. Dodge sold 6,845 Challengers in June and if not for May being a record sales month with 7,438 units sold, June would have been an all-time sales record month for the Challenger. As it stands, June 2015 was the second best sales month ever for the Challenger, with May 2015 being the best and April 2015 sitting third overall.

This string of strong sales months for the Dodge Challenger has led to big numbers in the first half of 2015, moving 37,011 Challengers through the first six months – which is by far the most Challengers Dodge has ever sold in two quarters.

Camaro Buyers Begin Waiting for 2016
While Chevrolet Camaro numbers were still fairly strong in June, they were way behind the Ford Mustang and over the next few months, I would expect to see Camaro numbers slide as prospective buyers hold off for the next generation Camaro that is set to arrive later this year. Leading up to the arrival of the 2016 Camaro, we should see a drop in sales, but when the 6th gen Camaro arrives later this year, we can expect a big sales boom for Chevy – with both new models and discounted 2015 models adding up in a hurry.

However, I don’t expect the Camaro to have any real shot at catching the Ford Mustang in annual sales – which will effectively halt the Camaro’s run of 5 consecutive muscle car sales titles.

Shun wrote on July 4, 2015 - 3:58am Permalink
It's funny how TORQUE News Can Nut Ride Ford President Dick All The Way Till It FALL OFF when news just said the Challenger sales is up at 56% and the Mustang sales at 54%, ALL FOR JUNE!!!!!! You know what, at the end of the day it don't matter. Ford Talking About Cutting Folks Bonuses At The Plant BC of POOOOOORRRRR SALES,,,,,, GM ALREADY DID AN NOW TALKING ABOUT LAYING OFF HIGHER PAID EMPLOYEE'S AN REPLACE THEM WITH NEW COMERS along with KNOCKING the pay down just for them SOOOOOOOOOOOO,,,,,,, why FCA/MOPAR/DODGE not doing that but sales up at 8% ENTIRELY WHOLE WHHHHHIILE FORD ONLY SALE'N SHIT"STINGS" but Ford in all dropped to -3% FOR JUNE SALES?????????? GM and Ford Going Under But whenever them Mustang and Camaro Buyers Realize and wake up to see they own OVER PRICED SUPER LIGHT WEIGHT ALUMINUM ENGINE (DEATH TRAP CARS),,,, HMPH,,, THEY GONE BE SOOOOOOOOOOO PIST By just purchasing Quick Cars That KBB STATED BACK TO BACK THAT The Challenger's More Reliable and More Comfortable and Resale Value Will BAAAAAAAAARELY TO NOT AT ALLLLLLLLL DROP ON THE CHALLENGERS BUUUUT,,,,,,, far as the shit"sting" and fake"maro", the resale value and value wiiiiiillll drop TOOOOOOOOO MUCH AFTER DRIVING OFF THE LOT AN AFTER AN YEAR WILL DROP TREMENDOUSLY AN THEY EVEN SAID IT'S NOT WORTH IT TO BUY,,,,,,, (((USED))) BC OF HOW LESS CHEVY AND FORD PUT INTO IT!!!!!!!! Over $10k for an light weight 80% Paper FROM AN TREE with an ALUMINUM ENGINE THATS NOOOOOOOT GUARANTEED AFTER 200K MILES????????????????????????????????????????? What Did Mr Wun Say On Norbit The Movie,,,,,,,,,,,,,,,,,, (((HELL TO THE NOIIII)))............
Mustang GT Florida wrote on August 6, 2015 - 3:43pm Permalink
Wow your witty repartee makes your view not transparent at all (sarcasm). Gee let me guess what you drive...