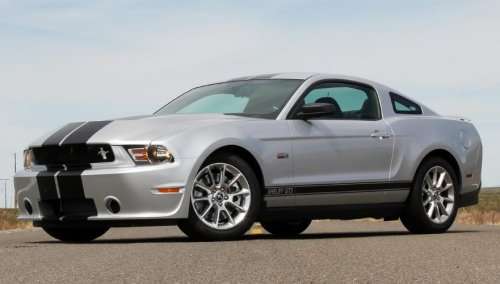 The folks at Shelby American have been promising an exciting display at the 2011 New York International Auto Show with help from the 2012 Shelby GT500 Super Snake with 800 horsepower but in addition to that high powered (and high dollar) Super Snake, the legendary car-builder used the Big Apple show to introduce the 2012 Shelby GTS Mustang.
Advertisement

Shelby American builds some amazing high performance Mustangs like the GT500 Super Snake but the problem (for most buyers) is that those amazing post-title package Mustangs come with a very high price. The down side to this is that the average younger car buyer cannot afford a Shelby package that costs $35k on top of the price of the based model Mustang and because of that, the average age of a modern Shelby American Mustang is well into the 50s. So, to help draw interest from younger Mustang owners and enthusiasts, Shelby has introduced the low-buck 2012 GTS Mustang.

John Luft, president of Shelby American, offered this insight into the design of the 2012 Shelby GTS:
"The Ford Shelby GT was introduced in 2007 as an agile, reliable and affordable muscle car. It dominated its SCCA racing class and was a popular canvas for enthusiasts to create their dream Shelby. Our Shelby GTS picks up that mantle and expands upon it with a choice of V6 or V8 power for a new generation of Shelby enthusiast who wants a car built just for them."

The 2012 Shelby GTS Mustang is intended by the company to be the “spiritual rebirth” of the 2007-2008 Shelby GT Mustang which offered amazing braking and handling with only a minor adjustment in power. The 2012 Shelby GTS post package is available on both the 2011 Mustang V6 and GT, so it doesn’t matter whether you have the fuel-friendly 3.7L V6 or the mighty 5.0L V8, there is a Shelby Mustang for you.

Gary Patterson, vice president of operations for Shelby American offered this comment on the use of the V6 Mustang for the 2012 GTS:
"The V6 Mustang is a particularly good platform for the Shelby GTS. It's even lighter and more nimble than the GT. And the V6 Shelby GTS makes about as much horsepower as the V8 in the Ford Shelby GT, but with better fuel economy at a lower price."

The new Shelby GTS Mustang begins by adding a Ford Racing handling pack with new package-specific springs, tuned stabilizer bars and front strut tower brace with a Shelby/Baer brake package improving the stopping power. Next, the power of the 3.7L V6 and 5.0L V8 are improved with a Shelby cold air intake kit and a Borla exhaust system adds a little power and a whole lot of audible attitude. Once the performance measures of the 2012 Shelby GTS Mustang were addressed, it was on to the exterior.

The Shelby GTS package begins with a unique Shelby front fascia and deep draw hood featuring “classic Shelby design”, with a black billet grille clad with the Ford "Running Pony" emblem in between. A set of "Powered by Ford" side badges add a little old school flavor and the Shelby GTS badging combined with the Shelby lettering across the rear deck lid and a set of Shelby Lemans stripes remind you that this is a very special Mustang.

The 2012 Shelby GTS Mustang has exterior modifications to help it stand out in a crowd and performance modifications to help it leave the crowd in the dust but the most important and impressive part of this new package is the price. The base price of the 2012 Shelby GTS, regardless of whether you begin with a V6 or V8 Mustang, is just $9,995. That price can certainly jump up if you select any of the higher-performance options like a supercharger package (available for either engine), 6 piston Shelby/Baer Brakes, adjustable control arms, 18" to 20" wheels and tire packages and a Watts rear suspension setup but in “stock” form, this Shelby GTS post-title package allows younger buyers (with smaller bank accounts) to get into a high performance Shelby Mustang for under $10,000 plus the cost of the Ford Mustang.

Click here to check out the gallery below for a closer look at the 2012 Shelby GTS Mustang.

Anonymous wrote on June 27, 2011 - 10:44am Permalink
the mustang has been a great flagship model for ford! The car represents the whole company as one of the most iconic automotive brand in the whole word. They added some new features to the car, I guess some navigational aids as an extra and <a href="http://www.autopartswarehouse.com/shop_brands/hot_tools/power_programmer.html">Power Programmer</a> to make the car drive and run better.