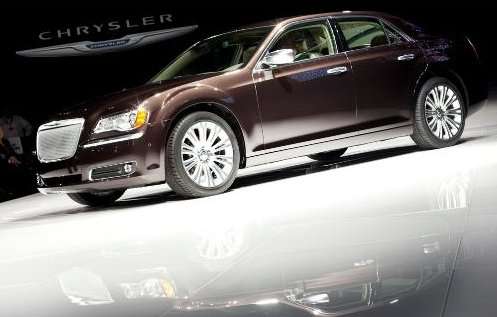 Amidst a Detroit-based choir belting out their own version of Eminem’s Lose Yourself on stage at the 2011 New York International Auto Show, Chrysler CEO Olivier Francois introduced the 2012 Chrysler 300C Executive Series – a vehicle which the company head claims is “the most luxurious Chrysler flagship sedan ever”.
Advertisement

While models like the late Chrysler Sebring might sway some consumers opinion, Chrysler has positioned themselves as a premium American luxury brand and with the introduction in January of the 2011 Chrysler 300, the brand upped the ante in the full size luxury segment. However, with the introduction of the 2012 Chrysler 300C Executive Series, the muscular sedan is taking American luxury to a whole new level.

Like all great luxury sedans, the most attractive features are on the inside of the 2012 Chrysler 300C Executive Series. The standard leather seating surfaces have been replaced with plush Napa leather, with 12-way power control for both front seats. The dash is covered in hand-stitched Italian leather and hand-finished wood trim joins that soft leather both on the dash, and throughout the rest of the interior. Finally, the buyer of the 2012 Chrysler 300C Executive Series gets to pick between either Mochachino or Black Poltrona Frau Foligno leather which shows up on the instrument panel, center stack and door panels – all making for one heavily leather-clad interior layout. Of course, the 2012 300C Executive Series is also equipped with Chrysler’s UConnect system, providing a state of the art infotainment experience for the driver and passengers.

Once the interior was squared away, Chrysler turned their attention to the outside of the 2012 300C Executive Series, beginning with a set of new 20” polished aluminum wheels. They then replaced the standard chrome door handles, mirrors and fascia trim with a unique platinum chrome finish, topping off the exterior with the gorgeous platinum chrome grille.

The 2012 Chrysler 300C Executive Series doesn’t get any upgrades in the way of performance but it does come with the 5.7L Hemi V8 – pumping out a whopping 363 horsepower and 394lb-ft of torque and thanks to Chrysler’s Fuel Saver technology, this powerful sedan still gets an EPA estimated 16mpg around town and 25 on the open road.

Chrysler expects the 2012 300C Executive Series models to start hitting showrooms in the fall of 2011 with the price coming closer to the time of availability.

Toyota's First EV Will Have a Name of BZ: Toyota BZ
First Videos From Inside The Boring Company's Las Vegas Loop
END_OF_DOCUMENT_TOKEN_TO_BE_REPLACED