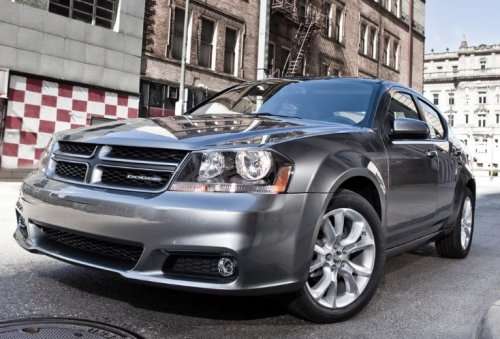 The 2011 New York International Auto Show opened today to the media and the folks at Dodge used the Big Apple show to unveil the performance variant of their mid-sized sedan – the 2012 Avenger R/T.
Advertisement

The R/T moniker from Dodge has strayed a great deal from the Hemi-powered rear wheel drive muscle cars of the 1960s and 1970s but to enhance the “Road and Track” abilities of the 2012 Dodge Avenger, Chrysler focused on the suspension setup. The entire suspension system was revised for 2011 to yield a smoother, quieter ride but for the Avenger R/T, they’ve gone even further to improve the handling of the sporty sedan.

Ralph Gilles, President and CEO of the Dodge brand, offered the following comment about the new 2012 Dodge Avenger R/T:
“The Avenger R/T makes driving a mid-size car a really fun, engaging experience. The Avenger R/T offers performance design cues both inside and out, as well as unique handling characteristics and a sport-tuned suspension. It’s a vehicle that is ready to earn its stripes as part of the Dodge performance family of vehicles.”

The key changes to the 2012 Dodge Avenger R/T are the front and rear springs, with the fronts seeing an increase of 17% in the spring rate and a 15% improvement in damper rate while the rear spring rate has been increased by 12% and the rear damper rates jump by 20%. Overall, this allows the Avenger R/T to boast roll stiffness 18% better than the non-R/T Avenger models currently sold as 2011 models. Dodge has also added a 21mm rear stabilizer bar; enlarged from the standard 19mm units used on other Avengers to further improve the handling.

The drivetrain of the 2012 Dodge Avenger R/T is the same as the non-R/T models, with the 3.6L Pentastar V6 churning out 283 horsepower and 260lb-ft of torque to the front wheels via a 6-speed automatic transmission. While I haven’t had the pleasure of driving a new Avenger with the Pentastar V6, I have driven the Chrysler 200 (which is essentially the same vehicle) with the new V6 and with 283hp, the 200 had more than enough gusto to smoke the tires and offer plenty of getup.

Finally, like all modern R/T packages, the 2012 Dodge Avenger R/T gets a bevy of fairly subtle interior and exterior upgrades including “hash mark” stripes starting on the front fenders and stretching up onto the hood, R/T logos inside and out, a rear spoiler and some sexy 19” aluminum wheels.

The 2012 Dodge Avenger R/T will be built alongside the other Avengers and Chrysler 200’s at the Chrysler Sterling Heights Assembly plant and we can expect to see these high(er) performance Avengers reaching dealerships sometime in the third quarter of 2011.