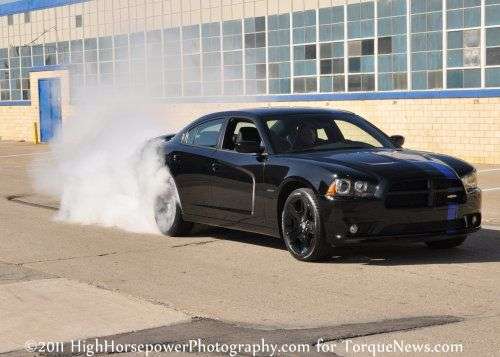 Chrysler drops the details on the Mopar ‘11 Charger

Today at the Mopar Accessory and Performance Parts Lab, Chrysler’s Mopar group announced a new partnership with Magnet Marelli and Shell as part of their Express Lane service program and to celebrate the occasion, the recently announced Mopar ’11 Charger was there to make its first media appearance.
Advertisement

When Chrysler released a rendering of the Mopar ’11 Charger last week, we were given a pretty good idea as to what to expect when the car was officially introduced but with today’s invite-only debut, we now have full information on the newest limited edition, Mopar-modified Dodge Charger.

Like last year’s Mopar ’10 Challenger, the Mopar ’11 Charger is based on the R/T package, meaning that this sinister black-and-blue sport sedan is powered by the 5.7L Hemi, sending 370 horsepower and 395lb-ft of torque to the rear wheels. The only major modifications made to the Mopar ’11 Charger on the outside (other than the hot black and blue scheme) are the 20” aluminum Envy wheels painted Pitch Black to match the body, a rear spoiler and the Mopar logo in the grille in place of the Dodge logo.

Inside, the Mopar ’11 Charger gets the Katzkin leather treatment with black leather accented by Mopar Blue stitching and a blue stripe running across the driver’s seat and the driver’s side of the rear bench seat. A pistol-grip style shift knob sits atop the Autostick-equipped automatic shifter with carbon fiber trim added around the gear selection area and that carbon fiber trim is echoed in place of the metal panel around the touch-screen infotainment system. Mopar flootmats, Charger branded doorsill guards and a set of bright silver pedal covers join the Mopar ’11 dash badging to finish off this limited edition interior with everything else in the car in black and chrome.

The Mopar ’11 Charger looks great but in designing this limited edition muscle-sedan, Mopar wanted to give it better performance along with those good looks. They began by adding a Mopar Super Track Pack, which includes a special stability control program, heavy duty brakes, performance steering and a sport suspension setup. This package usually includes 3.06 gears and 3-season Goodyear performance tires but Mopar went one step further, going with Goodyear F1 Supercar 245/45ZR20 tires wrapped around the black Envy 20” wheels. Next, Mopar added a 30mm front stabilizer bar and a 20mm bar out back along with cross-car strut tower braces in the front and back. Finally, Mopar added a 3.91 rear gear ratio set to improve the acceleration and even though the Mopar ’11 Charger has the same power output as the standard 2011 Dodge Charger R/T, the Mopar version is able to scoot from 0-60 in just over 5 seconds.

Only 1,000 Mopar ’11 Chargers will be made with 900 coming from the Brampton, Ontario Assembly facility to the US and the other 100 staying in Canada for sale to Canadian Mopar-lovers. The Mopar ‘11 carries a price of $39,750 and the company plans to start taking orders sometime next week so if you want to get ahold of one of these rare, Mopar-modified Chargers don’t waste any time.

Check out the gallery below which includes a few shots of the Mopar ’11 Charger and the video below from Chris Shunk of Autoblog shows the smokey burnout which I captured in the image above.