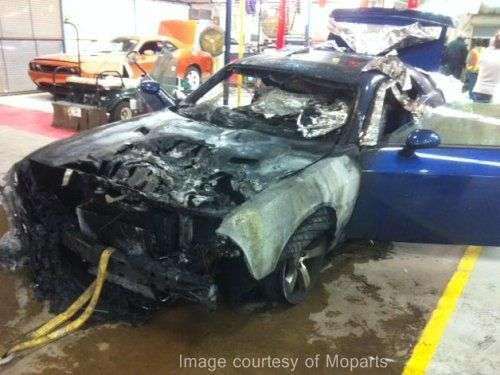 Thanks to cell phone shots and information on the enthusiast forum Moparts.com, we have learned that in the last week a limited edition 2011 Dodge Challenger SRT8 392 caught fire and burned inside of the automaker’s Brampton, Ontario assembly facility.
Advertisement

The image that was posted on Moparts reportedly was sent to a member of the community this past week with the picture (Image courtesy of Moparts) being captured by a plant worker on or around April 3rd, 2011. The story behind the image is that the 2011 Dodge Challenger SRT8 was entering the final stages of production when a packet of papers with build information got too close to a heat lamp and caught fire – clearly destroying the limited edition Challenger.

The discussion on Moparts and a variety of other sites have simply refered to the charred muscle car as a Dodge Challenger but in looking at the paint color and wheels, this appears to be one of the limited edition 2011 Dodge Challenger SRT8 392 Inaugural Edition models. The damaged wheels shown in the Moparts image are exclusive to the early SRT8 392 models as is the metallic blue paint option but interestingly, this Challenger doesn’t have the white stripes that run the length of the car. The gallery below has an image of one of these limited edition Challengers from the debut at the 2010 LA Auto Show – showing the SRT wheels, blue paint and white stripes.

According to Wheels.ca, a Chrysler representative stated that on April 3rd, the 2011 Dodge Challenger SRT8 pictured was involved in a “minor fire” and that the cause had not yet been determined. They also pointed out that fires do happen from time to time and no one was injured before the building’s sprinkler system extinguished the blaze.

While new vehicles moving along the assembly line often have paperwork attached to them and there are heat lamps in the production facilities, the image above makes it hard to believe that a pack of papers stuck to the outside of this 2011 Challenger SRT8 caused the damage – a sentiment which is shared by some of the folks on Moparts. If you examine the picture above, you can see that the greatest damage is around the driver’s front corner of the car with the damage decreasing as you get closer to the passenger compartment. This would lead one to believe that the fire began around the driver’s side front corner of the car but would a packet of paperwork sitting on the hood – or even taped to the car – really cause this kind of damage? When paper burns, it tends to curl up and away from the surfaces under it so it would be one heck of a paper fire for the rest of the car to catch...especially to the extent which it burned.

Sources have stated that the 2011 Challenger that burned was headed into the final stages of production when the heat lamp caused the fire. The vinyl stripes that run the length of the Inaugural Edition Challenger are not shown in the image above – even on the trunklid where the fire didn’t reach and wouldn’t have melted the stripes off – so perhaps this Challenger caught fire while the stripes were being applied?

There have been no reports of Dodge Challenger’s experiencing fire issues since returning to the Dodge lineup a few years ago so this could very likely be the result of human error. However, it seems unlikely that this fire was caused by something as innocent as a pack of papers getting too near a heat lamp. Hopefully as Chrysler investigates this issue there will be more information made available and should that be the case, TorqueNews.com will bring you any developments on this story.

A big thanks to Dan A. for the heads up!!

Tesla Contemplates A New Strategy for China Retail even As Sales Boom
Jay Leno on Elon Musk & EVs: “I Think He Should Get ... Credit"
END_OF_DOCUMENT_TOKEN_TO_BE_REPLACED