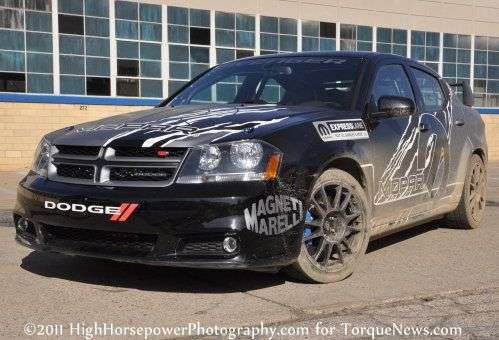 Earlier today, we brought you the news of the 2012 Dodge Avenger R/T making its grand debut at the 2011 New York International Auto Show and to help draw attention to the often-forgotten mid-sized sedan Mopar and Magneti Marelli brought out the heavily modified Dodge Avenger Rally Car.
Advertisement

Built for off-road racing, the Dodge Avenger Rally Car is a massive departure from the relatively mild-manned mid-sized sedan that most of us would recognize from the local Dodge dealership. Mopar and Magneti Marelli began with a 2011 Dodge Avenger Heat (Heat is the trimline…FYI), stripping all of the items out of the car that aren’t needed for racing. This includes items like the rear seat, the door liners, the HVAC system and the stereo – cutting over 200lbs out of the interior of the vehicle even after the race-spec roll cage and fire suppression system were installed. In addition to the cage and fire system, the Dodge Avenger Rally Car packs a set of OMP race seats fitted with 5-point safety harnesses and an elaborate race computer mounted in the carbon fiber center stack.

The Dodge Avenger Rally Car is powered by the same 3.6L Pentastar V6 that is also found in the newly announced 2012 Dodge Avenger R/T along with a great many other current Chrysler vehicles from the Jeep Grand Cherokee to the Dodge Challenger. Mopar then added a cold air intake, high flow exhaust system and performance tuned engine control unit (ECU), bumping the output from the stock 283 to the neighborhood of 300hp. The power is delivered to the front wheels (sorry AWD fans) by means of the standard 6-speed automatic transmission but controlling the autostick feature is a set of Magneti Marelli developed steering wheel paddle shifters – allowing the driver to bang through gears without taking his hands off the wheel.

Needless to say, off-road racing is incredibly tough on the suspension of the vehicle so Mopar and Magneti Marelli cut into the undercarriage next, adding a custom suspension setup that lowers the Avenger Rally Car around 1.5 inches to allow the car to handle the ruts and ditches of the rally course while also offering more response. Working in conjunction with the race-ready suspension system is a set of Pirelli race tires wrapped around Mopar/ Magneti Marelli 18” lightweight alloy rims. Finally, helping to ensure that the Avenger Rally Car can stock as well as it accelerates and handles, Mopar and Magneti Marelli added a heavy duty braking setup featuring 14.25” diameter front rotors and 13.5” diameter rear rotors, all of which are enclosed in 4-piston brake calipers. Also, to help the driver make the tightest turns on the rally course, a rear brake control handle has been added to the interior – allowing the driver to lock the rear brakes only.

Once the engine, transmission, suspension, brakes and wheels were addressed, Mopar and Magneti Marelli transformed the exterior of the Avenger Rally Car with a healthy coat of paint and a frenzy of race style decals sporting sponsor names and logos. The exterior upgrades are capped off by a gigantic rear wing, similar to the one found on some of the world’s most successful rally models like the Mitsubishi Evolution and the Subaru WRX STi.

Once Mopar and Magneti Marelli were done building the Dodge Avenger Rally Car, it was off to the dirt to make sure that it performed as great as it looks. Chrysler has provided the video below, giving you a look at the Avenger Rally Car in action along with a few interview sessions with Dodge brand CEO Ralph Gilles and Mopar CEO Pietro Gorlier.