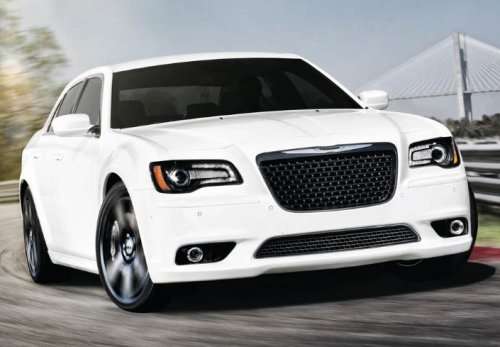 The key feature of the 2012 Chrysler 300 SRT8 is the 6.4L Hemi V8 developed by Chrysler’s Street and Racing Technology (SRT) division. This engine, which originally made its production debut in the 2011 Dodge Challenger SRT8, produces 465 horsepower and 465lb-ft of torque – improvements of 40hp and 45lb-ft over the 6.1L Hemi found in the previous SRT-variant 300 sedan. This powerful new engine is mated to the same 5-speed automatic transmission as the outgoing model but wheel-mounted paddle shifters have been added to give the driver more gearbox control without taking his hands off of the steering wheel. This drivetrain should allow the 2012 300 SRT8 to rip from 0-60 in the 4 second range with a quarter mile time well into the 12 second bracket and a top speed of 175 mph but thanks to Chrysler’s fuel-saver technology, the 2012 SRT8 is expected to yield fuel economy numbers roughly 25% better than the old high performance Chrysler sedan.

Next, the engineers from the SRT group tore into the suspension of the Chrysler 300, adding a new Adaptive Damping Suspension that uses a wide variety of inputs such as vehicle speed, steering angle, brake torque and throttle position to make up-to-the-second adjustments to yield the best possible handling properties. This system also affords the driver the choice of Auto or Sport mode, changing how the suspension behaves based on the mode and driving situations.

Helping to make the most of the advanced suspension system and the new high performance engine in the 2012 Chrysler 300 SRT8 is a set of SRT-unique lightweight 20” wheels wrapped in three- or four-season high performance tires. Under those sexy black wheels is a monster brake system with vented/slotted rotors measuring 14.2” up front and 13.8” units out back – all of which are clamped down upon by silver four-piston Brembo calipers. This brake setup allows the SRT 300 to go from 0-100-0 in under 16 seconds and go from 60-0 in just 120 feet.

The 2012 Chrysler 300 SRT8 is one of the most powerful luxury sedans on the market and the advanced suspension and braking system will help to make it one of the best-handling luxury cars available. Once the performance was taken care of, SRT next turned their attention to the aerodynamics and aesthetics of this sleek full sized sedan to allow this 300 to stand out from anything else in the segment.

Across the front, the 2012 300 SRT8 features a new lower fascia that focuses on adding to the sporty look than the standard front end that is more fitting of a standard luxury sedan. The chrome crossbar grille is gone, replaced by a unique slotted design that is echoed in the lower fascia openings as well. Along the side of the 2012 300 SRT8, new sills have been added to give the car a lower look and the rear of the car features a subtle rear spoiler hovering over the massive bright dual exhaust tips poking from the rear fascia.

Inside, the 2012 Chrysler 300 SRT8 features all of the high end luxury items found in the new Chrysler 300C but the SRT group has added a handful of high tech goodies to enhance the high performance driving experience. The interior is packed full of leather with carbon fiber highlights with the usual massive centrally mounted touch screen but in addition to controlling the HVAC and stereo, the touchscreen also offers horsepower output, torque output and yaw angle. This system works with the driver’s information center, which displays 0-60, 60-0, eighth and quarter mile times.

Chrysler states that the 2012 300 SRT8 will be arriving in showrooms late this year, promising that this will be the most powerful and best handling model ever…offering high performance and high end luxury in an affordable package. We can expect to see pricing once we get closer to the new muscular sedan hitting dealers around the country.

Other Chrysler Group News:
The 2011 Chrysler 200 S sedan and convertible debut at the NYIAS
The Dodge Avenger Rally Car debuts at the New York Auto Show
The 2012 Dodge Avenger R/T debuts at the 2011 New York Auto Show
Fiat could increase ownership of Chrysler to 46% by June
Chrysler confirms 2013 Dodge Viper coming in 2012
The Dodge Viper SRT10 ACR sets another track record
Chrysler drops the details on the Mopar ‘11 Charger

Marie wrote on May 24, 2011 - 3:46pm Permalink
So the engine in the 300 SRT9 is essentially the engine in the Challenger? I never knew that, but that explains the power. I like that it has the luxury look and feel but still with the pep and power of a sports car. Maybe I'll have to actually check one out for myself at the <a href= "http://royalgatedirect.com/">Royal Gate dealership</a>.
Anonymous wrote on June 9, 2011 - 2:34am Permalink
The car is built with reliable <a href="http://www.autopartswarehouse.com/motor_and_transmission_mount_bracket~pop.html">Motor and Transmission Mount Bracket</a>. Mopars have always been tough on its materials used to its fleet. The great thing about this car is its new features on the interior and some new alterations on the exterior.