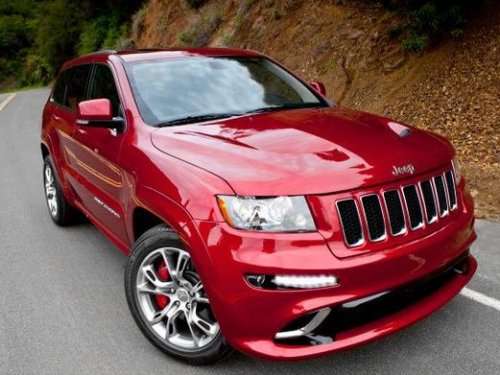 We have known for months that a high performance Jeep was on the way thanks to testing shots from Germany’s Nürburgring and as the 2011 New York International Auto Show opened to the media this week, the world was formally introduced to the 2012 Jeep Grand Cherokee SRT8.
Advertisement

Like the other vehicles that wear the SRT8 name, the 2012 Jeep Grand Cherokee SRT8 is powered by the new 6.4L Hemi V8 that pumps out 465hp and 465lb-ft of torque to all four wheels via Chrysler’s Selec-Track 4WD system. A 5-speed automatic transmission helps send the power to the wheels and new for 2012, the Jeep SRT8 features steering wheel mounted paddle shifters. This drivetrain configuration allows the 2012 Grand Cherokee SRT8 to rip from 0-60 in just 4.8 seconds while running through the quarter mile in the mid 13 second range and hitting an electronically limited top speed of 155mph. All of that and better fuel economy; as the Fuel Saver technology in the new 6.4L Hemi allows the new SRT8 Jeep to yield 13% better mpgs than the previous version.

In addition to the Selec-Track system, the 2012 Grand Cherokee SRT8 uses Chrysler’s new adaptive damping suspension system which the company claims (pretty reliably) that this is the best handling Jeep ever – reaching measures of 0.90g on the skidpad. This suspension system allows the driver to pick between five different modes for optimum handling in every possible situation.
• Auto: provides the most compliant ride and automatically adapts to any road situation using the adaptive suspension tuning
• Sport: provides enhanced body control for a sporty, fun-to-drive ride for the street
• Tow: provides a safe reduction in pitch and bounce for enhanced towing capability
• Track: provides the high-performance, firm, "track-tuned" suspension option to lock down body motion for the ultimate handling experience
• Snow: provides the most conservative dynamic mode, so the vehicle will safely stay
in-line in inclement winter weather conditions

Next, the SRT people went to work on the braking system, adding massive 4-piston Brembo calipers around 15” front rotors and 13.8” rear rotors to the new Jeep Grand Cherokee SRT8. When coupled with the 20” SRT rims wrapped in Pirelli PZero run-flat tire, the heavy sport utility vehicle can go from 60 to a dead stop in just 116 feet. It takes the new Chrysler 300 SRT8 120 feet to perform the same feat…just to give you an idea of the stopping capabilities of the Jeep SRT8.

Outside, SRT made siome changes to the standard Grand Cherokee to help the SRT8 version stand out, starting with the gigantic front fascia. Holding a set of brake cooling ducts on the outside of a massive center section that surely provides plenty of airflow for engine cooling, this revised front fascia gives the Grand Cherokee a very distinct, aggressive look. Black headlight bezels compliment the black lower fascia and a set of SRT-unique LED foglights add to the sharpened look of this high performance Jeep. Keeping the 6.4L Hemi away from the elements is a new hood with integrated vents; specific to the SRT models.

Along the sides, the 2012 Grand Cherokee SRT8 wears a set of SRT body-colored wheel flares over 5-spoke 20” wheels wearing a split-spoke design. A new side sill allows the Jeep to look more “planted” and out back there is a new rear spoiler mounted atop the rear window and a new lower fascia encasing the massive 4” exhaust tips. The exterior is finished off by a handful of body colored items like the side moldings and the well-recognized SRT8 badge is worn on the passenger’s side of the rear hatch.

Inside, the 2012 Grand Cherokee SRT8 features leather appointed seats and steering wheel with controls of the infotainment system and the aforementioned paddle shifters. The Electronic Vehicle Information Center (EVIC) is controlled by the wheel-mounted buttons and offers information like steering input measurements, horsepower, torque, 0-60 mph time, 60-0 mph braking distance, g-force, and eighth and quarter-mile times. In addition to those special SRT performance features, the 2012 Jeep SRT8 packs all of the features like a state of the art sound system, navigation and power everything.

The 2012 Jeep Grand Cherokee SRT8 is due to hit US dealerships in the third quarter of 2011 with a price expected closer to the actual release date. The introduction of this high performance Jeep could lead the way for an SRT8 version of Dodge's new Durango which has been billed since day 1 as being a performance SUV - only time will tell.

Check out the gallery below for a closer look at the newest high performance Jeep!