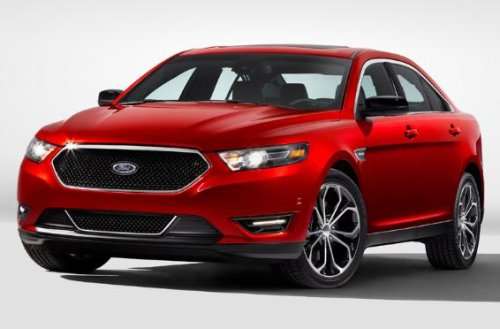 Rumors around the internet suggested that when the newest Ford Taurus SHO was unveiled, it would offer power in excess of the 400 horsepower mark. Unfortunately, the one aspect that has not changed for the 2013 SHO is the power output as the numbers stay right at 365hp but joining that high performance EcoBoost V6 is a 4-cylinder engine from the EcoBoost family serving as the new entry-level mill.

The 2.0L EcoBoost 4-cylinder puts out 237 horsepower and 250lb-ft of torque while also yielding a very impressive fuel economy measures which Ford expects to be in the 31mpg range. The other engine choice for non-SHO 2013 Taurus sedans is the 3.5L V6 currently serving as the standard engine in 2011 models. This mid-level mill in 2013 will get a jump in power from the 263hp that it currently offers to 290 in the new models and while no estimate has been given; Ford claims that this engine will also see increased fuel mileage over the current models.

Mark Fields, Ford’s president of The Americas had this to say about the debut of the new 2013 Taurus:
“We have significantly upgraded Ford’s flagship sedan through obsessive attention to detail. The new Taurus builds on the transformation we achieved in the 2010 model. Delivering so many upgrades so soon further underscores Ford’s leadership and commitment to delivering high-quality, fuel-efficient cars for our customers.”

The most obvious change to the 2013 Ford Taurus is across the front end, where the company has added a front end design that they admit was influenced by the current Audi A6. At a passing glance, the average driver may not notice the difference but when placed side by side, the changes made to the 2013 Taurus are clear. First, the headlights have had their inner line flipped, giving the front end a more aggressive – almost angry appearance. In accord with the shift of the headlight design, the grille has also seen its lines go from tapering inward at the lights to tapering out. Also, a revised lower front fascia area has made room for even larger LED fog lights across the entire model lineup. Ford capped the exterior changes by increasing the height of the rear quarter panels; allowing for larger, more easily seen taillights.

Even though the 2013 Taurus SHO isn’t getting any more horsepower, it will benefit from a handful of new options including a new performance package that adds an increase final drive ratio for better acceleration and a specially tuned suspension system for optimum handling. Aesthetically, the 2013 SHO gets a new chain-mesh grille treatment finished in black along with a new rear spoiler and some distinctive 20” wheels.

Ford has not stated exactly when the 2013 Taurus and Taurus SHO will hit the streets but we can probably expect to wait until at least early 2012 before these revised models hit showrooms around the country.

Anonymous wrote on June 2, 2011 - 9:33pm Permalink
'DO IT FORD' i love hearing all the talk about even better fuel economy for every car and truck . while tax payer robbing gm can only worry about getting more power in their slomaro.