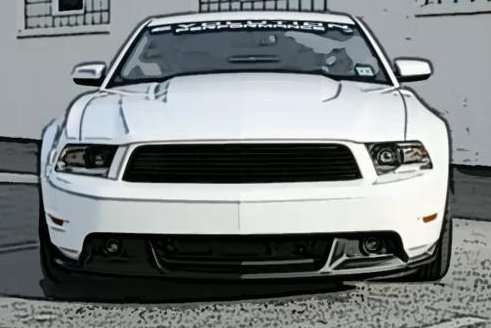 The 2011 Ford Mustang GT is powered by Ford’s new 5.0L V8 and Ford Racing offers a supercharger package to boost the power to 624hp – Evolution Performance has used those items and a handful of other Ford Racing and Evolution components to get their street legal 2011 Mustang GT into the 9 second range in the quarter mile.
Advertisement

I should start by pointing out that Evolution Performance began with a 2011 Ford Mustang GT California Special with the basic 5.0L V8 and the 6-speed automatic transmission. The transmission and engine internals have not been altered and the original 3.73 gear is still out back, although the transmission’s capacities have been enhanced by a Circle D Specialties Pro Series torque converter.

The output of the 2011 Mustang GT’s 5.0L V8 have been enhanced by the addition of the Ford Racing/Whipple supercharger that is offered by Ford Racing in either 525hp or 624hp variants but Evolution has set up their own package with this blower. The blower forces 12.5 pounds of boost into the stock 5.0L V8, with an upgraded throttle body, fuel pump system and fuel injectors feeding the engine. When working on cooperation with the American Racing headers and 3” off-road x-pipe, Evolution tuned their 5.0L Mustang GT to make an impressive 652 rear wheel horsepower and 577lb-ft of torque at the wheels. 652rwhp with a blower, a fuel system, a full exhaust system and a tune.

Next, Evolution wanted to make sure that they could make use of all of that power, so they refined the suspension setup, utilizing items from their own catalog and Ford Racing. Ford Racing lower springs give the car a more aggressive stance in addition to helping the Mustang get out of the hole, working with Evolution’s own Upper Control Arms and Mounts, Billet Lower Control Arms and Adjustable Panhard Bar and Brace. A set of Mickey Thompson ET Street (DOT approved and street legal) tires wrap Black Weld RT-S Wheels and this setup affords this 2011 Mustang GT to pull a 60 foot time of 1.5 seconds. If you aren’t a seasoned drag racer…a 1.5 second 60 foot time is a serious launch for a street car.

The overall result of the modifications made by Evolution Performance to Chris Cruz’s 2011 Ford Mustang GT California Special is an incredible 9.95 at nearly 143 miles per hour – with a STOCK engine and STOCK automatic transmission.

The Ford Mustang has made a name for itself over the past few decades for its ease of customization and with the return of the legendary 5.0L V8, the 2011 Ford Mustang is raising the bar for the entire industry and companies like Evolution Performance are making it happen. Videos like this one and the results of the fairly basic list of modifications make me want a new Mustang GT a little more each time I see them.

Thanks to Bill Barnes of Team Detroit Racing for the heads up!