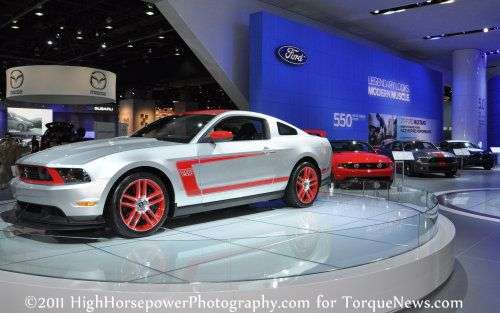 Forty-seven years ago today, Americans all over the country who reached for their morning paper were introduced to the brand new Ford Mustang after its public debut at the 1964 New York World’s Fair on April 17th.
Advertisement

When Ford introduced their sporty, low-cost Mustang at the New York World’s Fair, the company had expected to sell around 100,000 units in the first year. After the April 17th pubic debut in New York, the print media did the rest of the work with an amazing 2,600 papers around the country running a piece about the new American sports car that would go on to set the standard for performance cars in the US. The result of this nation-wide publicity was 22,000 Ford Mustangs purchased on the first day of orders and their planned sales figure of 100,000 units was reached in just the first three months of sales

In addition to the Ford Mustang taking the stage at the New York World’s Fair ON April 17th and dominating newspapers around the country on the 18th, the Mustang served as the pace car for the 1964 Indy 500 as well as a villain role in the 1964 James Bond film Goldfinger. All of this publicity for the Mustang paid off big time; as Ford went on to sell a total of 417,000 Mustangs through the first 12 months of the original pony car’s existence and after just 18 months, the Ford Mustang reached the one million sold mark. The Ford Mustang wasn’t just popular with of-age drivers, as during the 1964 Christmas season there were 93,000 Mustang pedal cars sold so even the little ones were lining up for their chance to pilot the topless Ford Mustang.

Due to the Ford Mustang being introduced 4 months into the 1964 year, they were all coded as 1965 model year vehicles although the first 121,538 Mustangs sold through 1964 are commonly referred to as being 1964.5 model year vehicles. In that first year, the standard engine was a 170 cubic inch inline 6 packing a balmy 101 horsepower with two optional V8s – one a 260 cubic inch mill producing 164 horsepower and a 289cid engine churning out 210 horsepower. When the 1965 model year Mustangs hit showrooms, the 170 I6 and the 260 V8 were gone as power became more of an issue – with the Mustang slowly shifting from a low-cost cruiser to a high performance pony car.

Roughly a year after the formal introduction of the Mustang, Ford rolled out the new Mustang GT and the rest, as they say, was history. The Ford Mustang has grown to be one of the longest running and bestselling cars in the history of the American automotive industry and most importantly, Ford has spent the last 47 years making the mighty Mustang progressively better.

So, let’s raise a glass to the car that has kept the American performance dream alive through this country’s toughest times, offering driving excitement and high performance to gearheads around the country for almost a half century. The Mustang’s competition (Barracuda, Challenger, Camaro, Firebird, Javelin) have come and gone but after all of these years, the famous Ford Mustang just keeps on getting better.