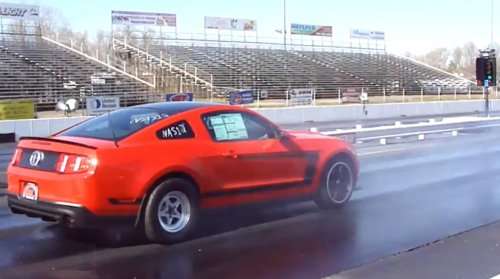 Video has hit the intrawebz of a 2012 Ford Mustang Boss 302 ripping down the quarter mile, turning in an amazing bone-stock elapsed time (ET) of 11.72 at 117 miles per hour with the window sticker still on the glass and a set of drag radial tires out back.
Advertisement

When the 2012 Ford Mustang Boss 302 was introduced last summer, it was engineered and marketed with an emphasis on road racing abilities, being billed by many as the best handling stock Mustang ever. The limited edition 2012 Boss 302 included an even more limited Boss 302 Laguna Seca edition, paying tribute to the famous California road course on which much of its testing was done. However, even with the new Boss Mustang being a street legal road racer, it was only a matter of time before someone put one on dragstrip and thanks to YouTube user TTindall85, we have our first look at a stock 2012 Boss Mustang tearing down the quarter mile. The result – an impressive 11.72 at 117.21 miles per hour.

Now, before any of the Mustang haters spout off about the 2012 Ford Mustang Boss 302 in the video not being stock, it has been fitted with a set of dragstrip-friendly rear wheels wrapped in what looks to be a set of street legal drag radials. Other than that, the new Boss 302 in the video is a showroom stock vehicle, packing the Boss 5.0L engine with 444 horsepower and a 6-speed manual transmission. Also, this same YouTube user has a video of the 2012 Boss 302 with the stock tires turning in a time of 12.36 at 116.40 with wheelspin on and off throughout the run. (You can check out that video here.)

Granted, from the look and sound of things in the video, the guy behind the wheel knows how to get a car off the line but for a 2012 Mustang that is supposed to be among the best handling factory Mustangs ever – stock 11s is mighty impressive. If you listen to the track announcer, you can hear him announce that the 2012 Boss 302 pulled a 1.69 60-foot time which implies a solid launch but it looks like there is still a fair amount of wheelspin. This means that as more of the new Boss 302 Mustangs reach owners, we can expect to see even quicker stock times as owners get more seat time in the mighty 2012 Boss Mustang.

Image captured from the YouTube video linked above. Thanks to the 2011 Ford Mustang facebook page for the heads up on this video! If you are a Facebook user and you are a Mustang enthusiast, check out the 2011 Ford Mustang page for all sorts of information on the modern Mustang and for the best Mustang community on the internet, visit MustangForums.com!

Check out the video below for a look at the 2012 Ford Mustang Boss 302 roaring down the quarter mile.