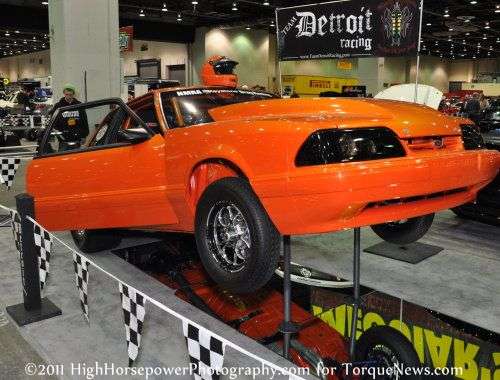 A while back, Detroit’s Cobo Hall hosted the 2011 Detroit Autorama, offering Motor City show-goers a chance to check out some of the best looking cars from around the area and around the country but amidst the crowd of garage-kept trailer queens, Team Detroit Racing brought out a spread of great looking high performance cars.
Advertisement

If you have never been to an Autorama event, there are really very few car shows like it in the country. The Detroit Autorama has an obvious bias towards classic and modern vehicles from Detroit’s Big 3 and through the massive Cobo Hall there are amazing examples of the cars that have carried the torch from Chrysler, GM and Ford. Many of these cars are 100% spotless show cars, spending their time nestled away in the garage with the exception of clean, low-humidity days and it is not that hard to understand – as these are truly some of the best-looking cars in the area. There are collections of vehicles that come from other parts of the country but the majority of the cars at the Detroit Autorama are some of the cleanest cars from the biggest clubs in the Metro Detroit area.

However, not every car at the Detroit Autorama is restricted to car-show duty and Team Detroit Racing is a fine example, offering one of the show’s largest group displays showing off purpose-built muscle machines from the Detroit Big 3…including a 1948 Fiat altered racer. As you approach the Team Detroit Racing display, the bright orange Fox Body Mustang (shown above) with the car suspended in a wheels-up launch makes the area impossible to miss. That’s not fluff either, as Carl Weinreich’s orange ’91 Mustang has gone 9.17 @148 in the quarter mile.

As you walk around the display, Joe Armstrong’s 12 second 2005 Mustang GT is joined by Nick Tilley’s Fiat Altered powered by a big block Chevy – which has turned in a best quarter mile time of 8.40 at 160mph. A pair of junior dragsters join the altered Fiat and on the other side of the information/apparel table sat a Dodge A100 pickup – one of my favorite vintage trucks to see turned into race vehicles –with an 11 second ET to back up its sinister look. The antique Dodge truck was joined by a clean big block Chevy Malibu and Rob Carbone 11 second 1979 Camaro Z/28.

The second row of the Team Detroit Autorama display began with Mike Jozwiak’s supercharged 1993 Ford Mustang Cobra followed by Bill Walker’s 1971 Monte Carlo that has turned in an impressive all-motor time of 9.50 at 144 miles per hour. A white turbo Trans Am owned by Dan McGhee breaks up the all-Mustang second row of the Team Detroit Area, followed by a 1999 SVT Cobra owned by Chris Maiorano and the last car in that row before you get to the back of Carl Weinreich’s wheelstanding Mustang, you got to check out Bill Barnes’ 2011 Ford Mustang Cobra Jet Clone…which has an all-motor best time of 11.60 at 120 miles per hour.

Congrats to the folks from Team Detroit Racing for once again putting together an awesome collection of high performance vehicles that are maintained so well that they fit in amongst the area’s trailer queens at the Detroit Autorama.