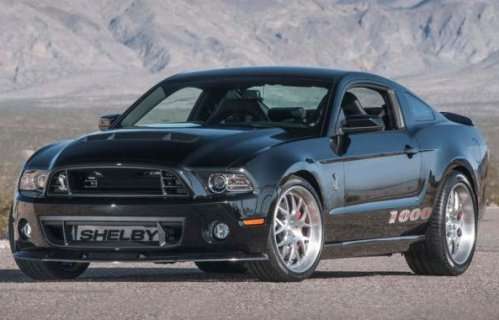 For the second year in a row, Shelby American will debut a new model at the New York Auto Show and while the name is the same, the 2013 Shelby 1000 Mustang delivers an astonishing 1,200 horsepower on pump gas.
Advertisement

The 2013 Shelby 1000 is based on the 2013 Ford Mustang Shelby GT500 that begins with a supercharged 5.8L V8 offering 662 horsepower but in the Shelby 1000 package, this blown 5.8L produces a whopping 1,200 horsepower on regular pump gas. No race fuel. No high octane alcohol. The same pump gas that you can buy at your local grocery store gas station and this mighty Mustang makes one thousand, two hundred horsepower.

"The 2012 Shelby 1000 was launched to great acclaim at the New York Auto Show last year to celebrate our 50th anniversary," said John Luft, president of Shelby American. "We're bringing back the Shelby 1000 to New York, but with Ford's new 2013 Shelby GT500 as the base car. With its new engine, launch control, adjustable suspension and other new enhancements, we've created a car with even more capabilities. The 2013 Shelby 1000 incorporates everything we've learned over five decades of creating high-performance vehicles."

The full part list for the 2013 Shelby 1000 Mustang is almost as long as War and Peace (you can check out the full list at the bottom of this article) but the simple explanation is that Shelby started with the 662 horsepower, 5.8L V8 from the 2013 GT500 and stripped it down to the bare block. From there, Shelby American replaced pretty much every component of the amazing Ford V8 with their own heavy duty parts from the 4.0L Ford Racing supercharger on top to the oil delivery system at the bottom. The result is a Ford Mustang that pumps out 1,200 – more than any other muscle car post title package ever.

"The 2013 Shelby 1000 is the most powerful production muscle car on the market," said Vince LaViolette, Shelby American's test driver. "But this car cannot be defined by just its amazing power. The steering provides wonderful feedback and the car tracks beautifully, giving it an athletic feel. It attacks corners, ripping through them with minimal body roll and tremendous grip. Yet the Shelby 1000 can be so docile that you can cruise it down the streets of Manhattan."

In addition to the monstrous supercharged V8, the 2013 Shelby 1000 features a collection of other modifications to allow this mighty Mustang to stand out in a crowd including a suspension package, high performance brakes, unique rims wrapped in high performance rubber, a unique Shelby hood and Shelby 1000 body graphics. The specifications for the 2013 Shelby 1000 Mustang specify that this is for the S/C “track” version so we suspect that, like the 2012 Shelby 1000, there may be a less powerful version as well.

A New Non-Mustang Shelby Performance Model
The company hasn’t provided any further information but in addition to bringing the 2013 Shelby 1000 Mustang to the 2013 New York International Auto Show, Shelby American will unveil a new non-Mustang performance model. The company is best known for their Mustangs but they have begun branching out with the introduction of the new Shelby Focus ST at the 2013 Detroit Auto Show. Considering the number of vehicles in the current Ford lineup that would cater to a high performance model including the new Explorer, the F150 and the new Fusion – it is hard to guess what this new model might be.

Luckily, with only a few days until the opening of the 2013 New York Auto Show – we don’t have to wait long to meet the 2013 Shelby 1000 Mustang or the new mystery vehicle from Shelby American.

danwat1234 wrote on March 22, 2013 - 11:11pm Permalink
That engine won't last long if you track it imo. It's a ridiculous amount of horsepower for RWD, should be intelligent AWD.
Patrick Rall wrote on March 26, 2013 - 12:50am Permalink
There are lots and lots of 8 and 9 second Mustangs running similar engine setups to what is found in the Shelby 1,000. This is a race engine fitted into a street car - not your average Mustang engine that has been stretched to 1,200 horsepower. Also, all of those fast Mustangs are rear wheel drive. There is no need for AWD if the suspension is setup properly to handle that massive amount of power. Even in the sport compact field, the fastest and quickest cars that started as 4WD models have been converted to rear wheel drive. LaFerrari has 963 horsepower and it is rear wheel drive.