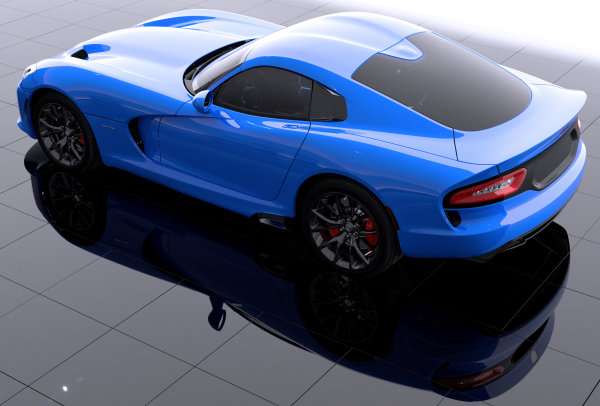 The Chrysler Group has just announced that the 2014 SRT Viper will come with a new blue hue but they don’t have a name – leading them to organize a contest to name the new Viper blue with the grand prize being a trip to the 2014 Rolex 24 at Daytona International Speedway.
Advertisement

As you can see in the image above, the new blue exterior paint option is unlike those blue options offered on the 2013 SRT Viper – or those previous models from the first few generations. The inclusion of this new, lighter shade of blue will most certainly offer blue car fans a new option that is very different from the darker, metallic GTS Blue. The only problem is that the company doesn’t have a new for the new 2014 Viper light blue color.

To fix this problem, the company has launched a minisite on DriveSRT.com that asks for fans to help name the newest blue to grace the sexy body of the 2014 SRT Viper as part of a new contest. The SRT Viper Color Contest began this morning at 9am and it will run through October 24th at 11:59pm EST. Entry is free and all you have to do is fill out a simple form with your name, email address and your idea for the name of the new Viper blue. A board of judges will pick through the submissions and pick their three favorite color names. Those three choices will then be put into a poll on DriveSRT.com where site visitors will vote on their favorite blue Viper name. The three people who came up with the finalist colors will also win a “Finalist Prize” of a Viper speed form. Little detail is offered on this prize but it is most likely a sculpture of sorts bearing the 2014 Viper shape and I suspect that it will be painted this new blue.

The person who entered the color name that wins that round of voting will not only get to see his or her name included in the 2014 SRT Viper color palette but they will also win a trip for 2 to watch the Rolex 24 at Daytona International Speedway next January. This four day, three night trip to Florida to watch the best known endurance race in the United States comes with a $600 Visa gift card to cover expenses while in Daytona, SRT Viper Hospitality passes, paddock passes and a meeting with a member of the SRT Design Team and the SRT race team. The winners will also get an SRT Viper race team hat, shirt and jacket so when combined with the trip to the race and the hotel, this grand prize has an approximate value of $2,800.

“ ‘The SRT Viper Color Contest’ gives our Viper enthusiasts an opportunity to be original, creative and contribute to the exterior design of our flagship American supercar,” said Ralph Gilles, President and Chief Executive Officer - (SRT) Street and Racing Technology Brand and Motorsports, Chrysler Group LLC. “Already available in a wide array of exterior color combinations, which provides our owners a way to personalize their cars, this contest is a great way for our dedicated fans to connect with the SRT brand and become an authentic part of Viper history.”

One key aspect of the contest is that if multiple people suggest one of the names that is included in the finalist voting, the person who entered their idea for the new 2014 SRT Viper light blue first will get the credit. In other words, those folks who enter their ideas early stand a better chance of winning so if you have a great idea for the name of this new blue and you want to take a shot at winning a trip to the Rolex 24 – head over the to the DriveSRT website right now to fill out the form!