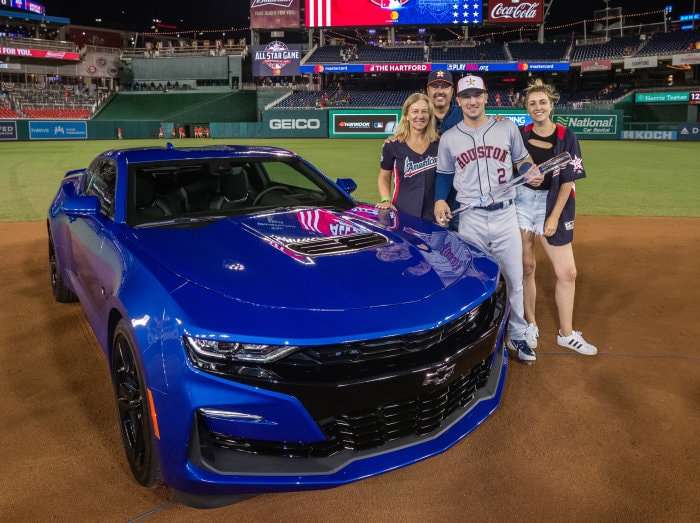 The 2018 Major League Baseball All-Star Game was held last night in Washington and Houston Astros 3rd baseman Alex Bregman was named the Most Valuable Player - an award that comes with a 2019 Chevrolet Camaro SS that he is giving to his mother.
Advertisement

Each year, Chevrolet gives the player who is named the Most Valuable Player in the Major League Baseball (MLB) All-Star Game a new car or truck. Last night, the American League and the National League squared off in the 2018 All-Star Game and when the game was over, Houston Astros third baseman Alex Bregman drove home with the MVP award in a brand new, restyled Chevrolet Camaro SS coupe.

Bregman's Big Shot
The 2018 MLB All-Star Game went into extra innings when the score was tied at 5 at the end of the regulation. Alex Bregman came to the plate hitless in his first two appearances, but he was able to use his at-bat in the 10th to hit a big home run. This put the American League up 6-5 and that gap would stretch to 8-5 when George Spring (also of the Astros) hit a home run and when Jean Segura scored on a Michael Brantley sacrifice fly ball.

The National League would score once in the bottom of the 10th, but the AL claimed the win and for his jump-start of the American League offense in the 10th, Alex Bregman was named the 2018 All-Star Game MVP.
“Bregman set a great example for baseball fans and especially our kids by hustling hard for the entire game and demonstrating exceptional teamwork — essential qualities to win on the field, in the classroom and in life — and that is why Chevrolet is proud to present the MVP award,” said Brian Sweeney, U.S. vice president of Chevrolet.

The Big Decision
After being named the MVP, Bregman had his choice of the Chevrolet Camaro SS or the Chevrolet Colorado ZR2. Although a truck seems like a useful tool for someone who lives and works in Houston, Texas, Bregman opted for the 455-horsepower muscle car. However, he won’t be keeping the Camaro – he has already said that he is giving it to his mother, Jackie.

His mom will surely enjoy the Camaro SS, which we expect will be delivered in fully-loaded form with the 10-speed automatic transmission.