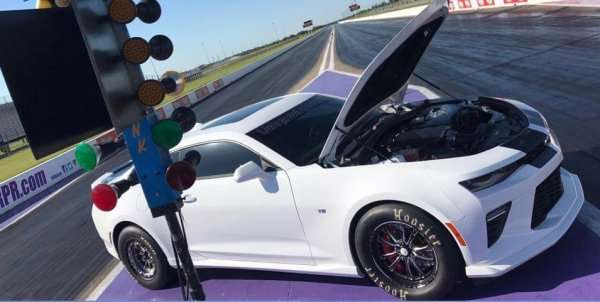 2017 Chevrolet Camaro SS owner Garry Means has teamed up with the crew at Late Model Racecraft to go after the 6th generation Camaro ¼ mile record and this stroked, cammed and supercharged Chevy muscle car is currently the second quickest 6th gen Camaro in the world – after just four tuning runs.
Advertisement

As we reported a few months back, the quickest 6th generation Camaro in the world is the “Fireball Camaro”, which ran a 9.003 at 149 miles per hour, but 2017 Chevrolet Camaro SS owner Garry Means has turned to Late Model Racecraft to transform his GM muscle car into the world’s quickest 6th gen. This led to Means’ Camaro being the first 6th gen Camaro with over 1,000 wheel horsepower and during the course of the first four tuning runs with this big power build, they have already become the second-quickest 6th gen Camaro in the world.

Since Gary Means and LMR have big plans for this 2017 Camaro SS, they have given in a memorable name – Ominous.

Gary Means's Ominous 2017 Chevrolet Camaro 2SS
After buying his 2017 Chevrolet Camaro 2SS coupe, Garry Means decided that he wanted to make it a whole lot quicker and a whole lot more powerful, so he turned to the high performance experts at Late Model Racecraft. LMR pulled the stock LT1, bored and stroked the block to 416 cubic inches followed by adding a custom LMR camshaft, an LMR cylinder head package, a custom LMR fuel system, a set of American Racing headers and a big supercharger from ProCharger. At 18 pounds of boost, the Ominous Camaro laid down 1,015 rear wheel horsepower and it does so with the stock 8-speed automatic transmission and the stock rear differential. The only changes to the drivetrain behind the monster engine is the prototype billet aluminum Circle D torque convertor and the 1-piece aluminum driveshaft, so while the engine has been heavily modified – the rest of the drivetrain is mostly original right down to the rear gear set.

Also, the Ominous Camaro has no real weight reduction, so the loaded interior of the 2SS package is still complete, with the only weight-reducing change being the smaller rear wheels wrapped in sticky racing tires. However, while the rear wheels might weight less than the stock rollers, the added weight of the supercharger setup likely makes this Camaro a bit heavier than the average 2017 Camaro 2SS coupe.

As you can see in the video below, this 2017 Camaro SS built by Late Model Racecraft has turned in a best quarter mile time of 9.51 at 148.95 miles per hour. Keep in mind that the 9.51 run came during the initial test and tune session with the Ominous Camaro so after just four runs, the Ominous Camaro is around a half a second behind the Fireball Camaro in its quest to be the world’s quickest 6th gen Camaro.

That 9.51 at 148+ makes the Ominous Camaro the second-quickest 6th gen Camaro in the world while also being the quickest 2017 Camaro in the world, but the team has high hopes for this supercharged muscle car in the coming weeks. LMR and Garry Means are aiming to best the Fireball Camaro’s 9.00 time and at the same time, the Ominous Camaro team plans to also be the first 6th gen Camaro to run in the 8-second quarter mile range.

Means expects to have the Ominous Camaro at the track this weekend, so the 6th gen record could fall in the next few days. When that record does fall, you can be sure to read all about it here at TorqueNews.com. In the meantime, check out the video of Garry Means’ Camaro in action in the video below.