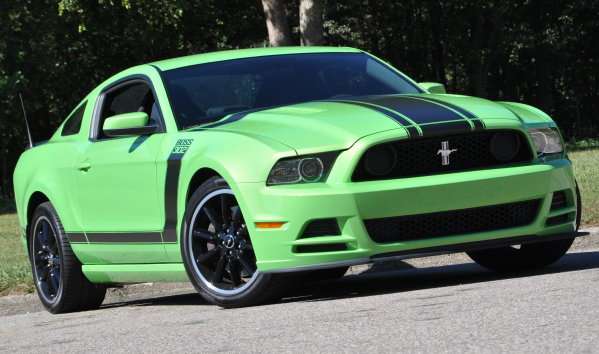 The 2014 Ford Mustang is the final model year for the S197 generation and a typical late-run sales rush helped to push the Mustang ahead of the Chevrolet Camaro and Dodge Challenger in February 2014 sales – although the Camaro still leads the sales race for the 2014 calendar year.
Advertisement

The 2015 Ford Mustang will introduce the all-new S550 Mustang platform and that makes 2014 the final model year for the current S197 Mustang generation. As is the case with any car with a massive enthusiast following, the fact that the Mustang as we currently know it is about to race off into the sunset helps to spur sales as those folks who love the look of the current model rush to buy one before they are gone. Although we can expect to see 2014 Mustang models on dealership lots after the 2015 Mustang goes on sale, we are entering the final months where a prospective buyer can order a 2014 Mustang to his or her exact specifications.

For Ford Motor Company, the controversy stirred up by the look of the 2015 Ford Mustang could actually lead to stronger sales of the 2014 models than we usually see from an outgoing model. Since the 2015 Mustang was introduced back on December 5th, there have been plenty of critics of the new look who have been more than happy to voice their negative opinions across the social networks. The Mustang fans who are so passionate about disliking the S550 Mustang is more likely to buy a 2014 model year Mustang while their negative opinions are likely to spread to some extent – and those other folks who agree with the critics of the 2015 Mustang also help to drive up final-run sales.

This final production run rush for the 2014 Ford Mustang allowed the Blue Oval’s muscle car to sell 6,410 units in February 2014. This figure is only a slight increase from the same month in 2013, but a slight increase is better than a decline in sales. More important to the fans of the mighty Mustang, 6,410 units sold in February allowed the original pony car to beat the Chevrolet Camaro in the second month of 2014.

General Motors sold just 6,211 examples of the Chevrolet Camaro in February. As is the case with the Mustang, the Camaro posted a slight growth from February 2013 to February 2014…but GM posted less growth than Ford and that caused the Camaro to lose the sales battle for February 2014. The good news for GM fans is that after a strong January, the Camaro still leads the segment in overall sales for the 2014 calendar year by about 650 units. General Motors is hoping that the front and rear redesign of the 2014 Camaro will help the modern muscle car to win a 5th straight annual sales title.

As is generally the case, the Dodge Challenger finished third in the monthly segment sales race with 3,694 units sold last month.

Sales were down across the entire muscle car segment for February 2014 – presumably due to the miserably cold and snowy winter that has affected a massive number of American car buyers. This has been one of the worst winters that I can remember in terms of snow and ice, including harsh winter weather in regions (like the Deep South) which are not accustomed to winters like this one. Considering how much these past few months have lead prospective buyers away from rear wheel drive performance cars, February’s numbers should lead to much bigger numbers as we hit spring. The Camaro has a lightly refreshed exterior and the Mustang is in its final months of production ahead of the 2015 models – and both of those factors should lead to strong muscle car sales through this spring and summer.

(Just to be clear, I understand that the Ford Mustang Boss 302 is from the 2013 model year, but this Mustang is one of my favorite modern cars so I opted to feature this Gotta Have It Green Boss over an auto show picture of a car on a stand.)

Parks McCants wrote on March 4, 2014 - 1:26am Permalink
Although I'm a confirmed " Old School" motorhead, I'm amazed that the big three can sell ANY muscle cars. Must be a very limited nostalgia driven collectors market. However, I will admit that the 302 looks like a blast to drive. Thanks for the read.