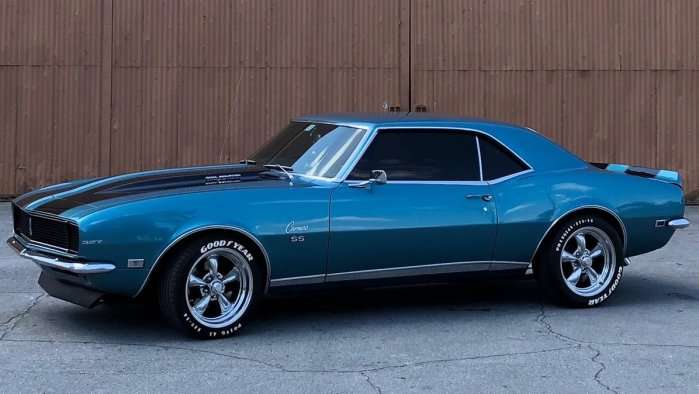 The TorqueNews/Camaros Unlimited Camaro of the Month for July 2018 is the 1968 Chevrolet Camaro RS shown here, owned by John Watkins of Lakeland, Florida.
Advertisement

For July 2018, our Camaro of the Month is the stunning 1968 Camaro RS shown here, owned by John Watkins of Lakeland, Florida. When I spoke with John for more information on his Camaro, he provided a great story of how his passion for the Camaro began decades ago and how finding the right woman has led to an interesting future with his stunning muscle car. You will find that story below in his own words.

John Watkins and His Camaros
I got my first ’68 Camaro on Saturday, March 10, 1979…my 16th birthday. I had to wait until Monday to get my driver’s license. The two longest days of my life to date.
It was a 327 automatic Ash Gold beauty. It was pure stock but very quick. We had an abandoned WWII B29 training facility in town that offered a 150’ wide by ¾ mile concrete runway that attracted a crowd of regulars on Friday nights….until the Sheriff’s Deputies dispersed the group…lol. There was just no feeling that came close to sitting behind the wheel of that Camaro and feeling like you were king of the road. Such a feeling of freedom and independence.

When I was 18, I got married and, with gas having recently risen to $1.25 a gallon, priorities had to change. So, with much disappointment, the 16 MPG Camaro was traded in for a 48 MPG Datsun B210. A decision I questioned for the next 3 decades.

About 15 years ago, the old itch became unbearable and I started looking at what was out there in the ’68 Camaro market. My children were all adults and I was ready to rekindle the fire. I looked and looked. Most of what I saw was either too far gone for my abilities or so heavily modified, they didn’t have the same feel that the old Ash Gold car had given me back when I was 16.

A few more years went by and my wife of 28 years and I divorced. A couple of years later, I met an amazing person and my focus shifted to cleaning up the past and developing this new relationship. After 7 years of dating and engagement, Roxane and I got married… Saturday, March 10, 2018, 39 years to the day that I got that first Camaro.

Last year, after seeing me spending countless hours looking longingly at “Camaros for Sale “ websites, she suggested we go look at some in person. I was stunned. I didn’t think that it was anything she would be interested in. Turns out her first car was an Ash Gold ’71! So we started driving around, chasing ads for Camaros. We looked from Maryland to Texas to South Florida. Nothing really spoke to me or the deal would fall through. Then I found a Craigslist listing 40 miles from me in Orlando. As soon as I saw the car, I knew it was the one I had been looking for. Beautiful paint… an all original interior that was practically flawless… and a stance I couldn’t get out of my mind. After a couple of months of wheeling and dealing, we came to terms and I drove it home. I didn’t quit smiling for at least a week. In fact, I’m still smiling. It is amazing how all those old feelings came rushing back as soon as I got behind the wheel. The smells, the sounds, the feel…it’s like you’re 16 again.

As far as the car…cosmetically there is not much I could do to improve, in my own opinion. The paint needs a little freshening up in a few spots and the window tint has a few scratches in it, so that is something I am going to address. Mechanically, there were some issues in the wiring that I took care of right away myself. I recently replaced the taillights with DigiTails LED’s. I absolutely love them!

I have an appointment with Detroit Muscle Speed Shop to help me address some acceleration issues. I mean, after all, what is the point in having a Camaro if you can’t do a respectable burn out? I feel very fortunate to have found this car in the condition it is in. In fact, it only has 51,000 original miles!

After posting a few pics on Face Book, I received an invitation to join the FB group, Camaros Unlimited. What an incredible group of inspiring, passionate people. They are so proud of their cars and love to show them off. I was seeing all these pictures of people with friends at shows and piles of trophies and just having a great time. So I said to my wife, “I’m going to look around for a local cruise night or car show. It might be fun.” Now, Roxane spent 28 years in the Air Force and retired as a full Colonel. I love saying that. Can you tell how proud I am of her? So here is what she said…“You know, I have so many friends all around country that I would love to visit. Why don’t we buy an enclosed trailer and a motor home and map out car shows all around the country where I have friends and spend a year or so travelling and going to shows?” As soon as she pried me off of her, I registered for Cruising the Coast in Gulfport/Biloxi in September. Life is good!