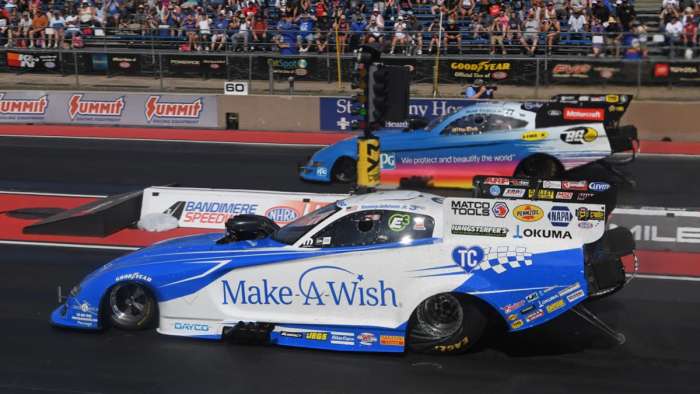 This past weekend was a big one for the Dodge brand’s involvement with the big leagues of drag racing, with the new Charger SRT Hellcat being shown off alongside Matt Hagan’s newest racecar, which mimics the widebody look of the new road car. While Hagan’s widebody-inspired funny car didn’t get the win, teammate Tommy Johnson Jr beat red hot Bob Tasca III in his Ford Mustang in the finals to take home the Wally.

Dodge Charger Teams Qualify Well
After watching John Force and his Chevrolet Camaro win the Dodge Mile High Nationals last year, the Don Schumacher Racing drivers came into Bandimere Speedway in Colorado this past weekend with the hopes of winning the event that is sponsored by the company who backs their team. As is always the case, Dodge used the event to show off a new car, this year focusing on the new Charger SRT Hellcat Widebody after introducing the Challenger 1320 at last year’s event.

In addition to showing off the production-ready Charger Hellcat Widebody road car, the Dodge brand rolled out Matt Hagan’s newest racecar, complete with a graphics package that creates a similar look to the road-going sedan. It was and always is an exciting event for Dodge and Mopar fans, but things would just keep on getting better.

In the first round of qualifying Matt Hagan and his Dodge Charger funny car posted the quickest time, edging out the Camaros of Robert Hight and John Force. In the second round, Ron Capps put up a big number to jump into the second spot, trailing Cruz Pedregon in his Toyota. This pushed the other Mopars down the ladder a bit and things remained unchanged through the third round, but in the fourth round, there was a big shake-up.

Robert Hight’s Camaro moved into the top spot, Tommy Johnson Jr. moved into second and the majority of the rest of the lineup remained unchanged. This left Capps in fourth, Hagan in seventh and Jack Beckman in tenth from the Don Schumacher camp while John Force in his Camaro sat sixth. 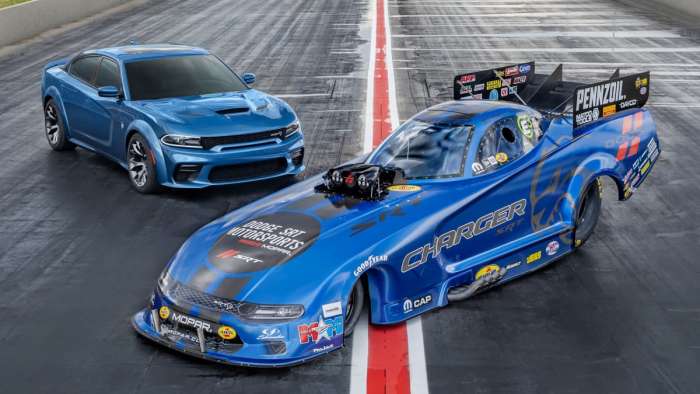 Charger Shines in Eliminations
In the first round of eliminations, three of the four Don Schumacher Racing Dodge Charger funny cars won, with Capps beating Todd Simpson, Johnson beating Jeff Diehl and Beckman beating teammate Hagan. Robert Hight and his Camaro had a free pass into the second round in the 15-car field, as did team owner John Force, who beat J.R. Todd.

On one side of the ladder, Robert Hight’s Camaro took on Tasca’s Mustang, with the Ford grabbing the starting line advantage and laying down the quicker time to advance to the finals. On the other side, Johnson’s Dodge Charger took on Pedregon’s Toyota, and although Cruz had an early lead, he ran into issues and Johnson’s Charger took the win.

In the finals, Bob Tasca III and his Mustang jumped out to a big starting line advantage (.058 to .092), but Tommy Johnson Jr. drove around Tasca on the big end, running a 4.102 at 308 to the Mustang’s 4.158 at 302. This gave Johnson his second win on the season and the sixth for Don Schumacher Racing.

Season Standings
With the win, Tommy Johnson Jr. moved up into the second spot in the championship race, trailing Robert Hight by 149 points. John Force is third (-201), Ron Capps is fourth (-232), Jack Beckman is fifth (-255) and Matt Hagan is eighth (-365), so all of the Don Schumacher Racing and John Force Racing drivers are in the group that makes it into the Countdown to the Championship. There are four races left before the championship race, so things could change between now and then, but it looks as though all four of the DSR Dodge Charger drivers and both of the JFR Chevrolet Camaro drivers will be battling for the title at the end of the season.

See you in my next story where I am discussing why Dodge Charger sales climb while while other large carmakers such as Ford and Chevrolet slump.