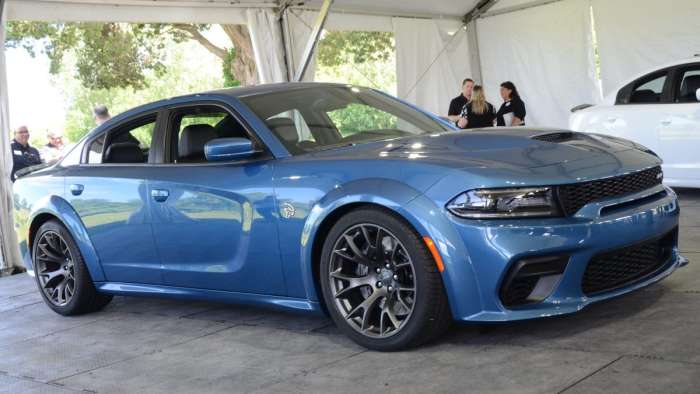 Dodge Charger sales are up 9% during the first half of 2019 while the key competitors from Ford and Chevy are selling at a much lower rate than last year.
Advertisement

The odds are good that if you pay much attention to the American automotive industry, you have heard all of the talk about the growing popularity of sport utility vehicles leading to the demise of cars in general, but the Dodge Charger continues to buck those trends. Through the first half of 2019, the full-sized, rear-drive sedan is up 9% while the key competitors in the large sedan segment are down compared to a year ago. In fact, if you look at the sales figures of all three American automakers, there are a few cars that have shown positive growth through 2019, but when it comes to larger cars, only the Dodge Charger is having a good year.

Dodge Charger Sales in June
June 2019 was the final month where FCA will report monthly sales, as starting in July, they are switching to the same quarterly reporting system that General Motors began using last year and that Ford started using at the beginning of 2019. In June 2019, Dodge sold 9,034 examples of the Charger, making it the bestselling large sedan in the US market, but more importantly, the four-door muscle car posted growth of 36% compared to June 2018. Mind you, this comes at a time when consumers are being told that no one wants cars – especially big cars – rather than an SUV.

Critics might question whether this sales growth by the Charger comes due to a lack of a popular, large SUV in the Dodge showroom, but that isn’t the case. In June, FCA sold 5,538 examples of the Dodge Durango, which is a 4% improvement over the same month last year.

On the year, the Charger is up 9% with 45,046 units sold while the Durango is up 13%, so the sedan is selling well alongside a strong-selling SUV.

Ford and Chevrolet do not offer monthly sales for June, but during the second quarter of 2019, the Taurus moved just 2,390 units, down 70% while the Chevy Impala moved 12,536 units in April, May and June combined, down 8%.

Charger Leads the First Half
As mentioned above, Dodge sold 45,046 Chargers during the first half of 2019, comfortably outselling the Ford Taurus at just 8,121 units and the Chevy Impala at 25,795 units. More importantly than just outselling the competition, the Charger was the only one of the three big American sedans to post positive growth, improving by 9% while the Impala was down 7% and the Taurus is down 48%.

In other words, the Dodge Charger continues to post positive sales growth while cars in general die off in the United States market, with large sedans showing the biggest declines. Some people question Dodge’s decision to stop making their smaller cars a few years back, but with the Charger posting solid year-over-year growth and the Challenger posting the strongest growth in the muscle car world, it looks as though FCA has made the right move with regards to the go-fast brand.

See you in my next story where I am discussing 3 new wheel changes for the 2020 Dodge Charger SRT Hellcat.

Jerod wrote on July 23, 2019 - 1:44pm Permalink
Well, Ford is doing away with all sedans, so they haven't put much effort into it. Dodge is different with Charger and Challenger.
Jeff wrote on July 23, 2019 - 1:46pm Permalink
Mustangs and Camaros have become lame and boring. Dodge is hot.
Aric wrote on July 23, 2019 - 1:57pm Permalink
Sadly Mustangs and Camaros are separating from their roots. They are going more European sports car than the pony car they once were.
Zach wrote on July 23, 2019 - 1:58pm Permalink
Dodge Charger is a sporty looking four door car, which is what everyone wants. Plus it’s not considered a sports car on insurance so it’s even better. While most four door cars look boring.
Paul Basileo wrote on July 23, 2019 - 4:57pm Permalink
I own a 2017 Charge R/T. It has been thrilling to drive with its' Hemi engine, completely trouble free and I get more compliments on its' looks than any previous car I've had. Of course mileage is only 16 city but 26-28 highway. After all, one does have to pay to play.
Mohammed Elsheme wrote on July 24, 2019 - 6:08pm Permalink
I need price for dodge charger 2019 at Egypt Many thanks for you M.elsheme
DeanMcManis wrote on July 24, 2019 - 8:37pm Permalink
I’ve rented the Charger several times and it was roomy and comfortable. I was actually surprised that the base V6 engine got decent gas mileage while being reasonably peppy. FCA’s choice to drop their economy cars will hurt them drastically in future years. They already paid out millions in fines for having poor fuel economy for their fleet. Hopefully the rumored hybrid models will be coming soon, or they will face the same issues again despite their good sales numbers
Randall wrote on August 21, 2019 - 2:45am Permalink
All the fun of a powerful sports car, but with 4 doors, adult leg room and growling exhaust. Everytime I pass a new Camry in my blacked out Charger with Hellcat wheels and red Hemi decals, I see the driver looking at my Charger as if he made the wrong choice. I'm sure that idea is only confirmed when they hear my exhaust note as I leave them in the dust.

Tesla-Funded Research Reveals One of The Biggest Mysteries of EV Battery
Tesla Tesla Buyer Nets a Whopping $12,000 Discount After Asking for Reduction
END_OF_DOCUMENT_TOKEN_TO_BE_REPLACED