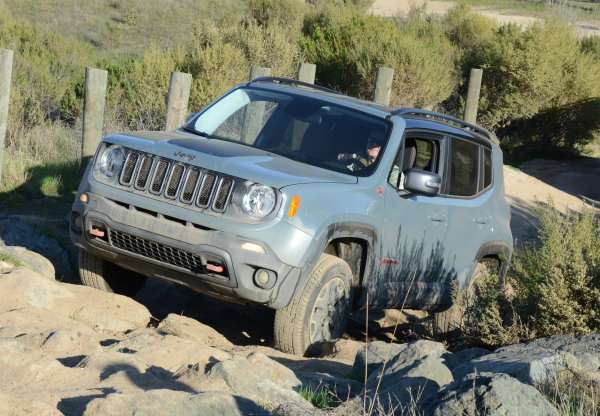 The Jeep Renegade is Far Better than the Patriot, Compass

Since the first batch of 2015 Jeep Renegade reviews have gone to press, there have been the expected groups of skeptics insisting that this new Renegade is nothing more than an Italian-built rendition of the Compass or Patriot, but having had the chance to put mileage on all three – I can comfortably say that the new Renegade is better in every way.
Advertisement

Let me begin by stating very clearly that this piece isn’t about trash-talking the current Jeep Patriot and Compass. They are both great vehicles, and that is why they have sold so well for so long. However, they are not without their shortcomings, and those shortcomings are what “hardcore Jeep fans” use to put down these small, efficient SUVs. These folks insist that the Patriot and the Compass are Jeeps for people who really don’t need a Jeep, and that these models are not capable enough to deserve the Trail Rated badges.

Honestly, these vehicles aren’t as capable as say, the Wrangler or the XJ Cherokee, but the Chrysler Group didn’t set out to make a new, smaller Wrangler. They set out to make the Patriot and the Compass small, efficient and affordable sport utility vehicles that offered surefootedness in all types of weather. Are they the best off-road vehicles in the world? No, and Chrysler wouldn’t have you believe otherwise. Do many of the people who buy these models do so because they want to go conquer Moab? No. Are they as off-road capable as any other vehicle in their segment? Yes…and that is why they have proven to be so popular.

The people buying these vehicles don’t have the same expectations as someone buying a Jeep Wrangler, so while it may not be “Jeep enough” for some of the brand’s fans who are running around in 1970s and 1980s models, they did what they had to do to succeed in the segment.

The Renegade follows that same ideology, but the Jeep engineers worked to make this fun little SUV better than the Patriot in Compass in every way, so while it still won’t hang with the likes of the Wrangler in harsh conditions – it will handle off-roading better than any vehicle in that segment, while being far more comfortable off-road than are the Patriot and Compass.

The Renegade is a Great SUV
I have had the pleasure of driving the 2015 Jeep Renegade in a variety of trim lines, both on the road and on an off-road course. I have also driven the previous Jeep Patriot and Jeep Compass in similar situations. The Renegade offers a far smoother ride, it handles better and it is quicker, making it all around more fun to drive. More importantly, for a vehicle that offers such a smooth ride on the road, it handles itself off-road very well. During off-road testing, I have run into some problems with low-hanging components of the Compass getting hung up on things like rocks and logs. You had to pick your path carefully, as the Compass didn’t move as well up a rocky slope and if you didn’t avoid the larger rocks, you were scraping up the undercarriage.

However, the Renegade was both more easily controlled when cutting through large rocks and there was less concern about large rocks getting caught up underneath the vehicle.

In addition to being able to climb over large objects, the Renegade can get through deeper water and even in very loose footing, the Hill Descent system affords you incredible control when coming down a very steep sand hill. The Compass wasn’t a bad off-road vehicle, but the Renegade truly is better in every way.

Add to the strong off-road capabilities and the impressive on-road ride quality the new removable roof system and the 2015 Jeep Renegade really is a vehicle that Wrangler fans should enjoy. It isn’t as rugged as the Wrangler, but it is less expensive and more efficient while still affording you a solid level of off-roading capabilities with a similar open-air feel to what you get with the tried and true Wrangler.

If you are in the market for a new small SUV, don’t listen to all of the negativity from those with no experience with the 2015 Renegade. This is one great little SUV that offers more Jeepability than any small model we have seen in the past.

Robert wrote on February 17, 2015 - 5:27pm Permalink
Dint be offering up muted opinions when it comes to these sub compact CUVs. The zippieness of the engine is enough to paralyze me from pulling the trigger on the HRV. That means id have to wait another 3 years for reliability numbers! I assume we'll get a piece comparing all these after you've been behind the wheel, and I'm looking forward to your opinion on how they differentiate.
Parks McCants wrote on February 18, 2015 - 2:41am Permalink
Apples and Oranges Robert. Nice read Patrick. Thanks.
Robbie Robertson wrote on April 30, 2015 - 5:40pm Permalink
As Elvis once said: Zippidy Dippidy doo da, scoobidy doobidy doo doo.
Patriot2012 wrote on May 10, 2015 - 12:53pm Permalink
Let's see what the renegade does in the snow. Suspect to timing coming out after Winter. My Patriot is one of the best snow riders out there. Now let's see the proof that the Renegade is just as good in snow. We will see this December.
Genni wrote on November 15, 2018 - 2:16pm Permalink
I am torn between the Patriot and the Renegade...how well has yours handled in the snow?
VietVetInOhio wrote on November 2, 2021 - 11:18am Permalink
I have driven my Renegade Latitude in 4 winters thus far and have no complaints except that it's road noise is excessive. I'll probably install some sound dampening materials soon. I have the 2.4 engine. It was burning oil at 1 qt per 1000 miles. Jeep's change in the engine control computer is supposed to address that problem. I do not drive much so I've not yet checked to see if there is a change.
James Bond wrote on September 8, 2015 - 4:54pm Permalink
It's unfortunate that the CVT in the Patriot gave it such a bad rap. They took the CVT out in 2014 because of all the bad press (deservedly so) but with the 6 speed auto transmission I prefer the Patriot to the Renegade. The Patriot has a lot more cargo room and I much prefer the looks of the Patriot. If you get on the jeep forums you can find many Patriot owners who report very high mileage with very few repairs. The first few model years had their share of issues and thus ruined future sales and ultimately the model is going away as a result. However, I think the 2014-2016 Patriot is going to turn out to be a much more desirable used vehicle down the road that the Renegade. The Fiat 500 on which the Renegade is built has a terrible reliability track record so only time will tell I guess.
Jdog wrote on September 10, 2015 - 2:48pm Permalink
Was this review of the renegade offroad "tralhawk" edition compared to patriot "offroad/FDII" edition? or was it compared to a standard 4wd patriot?
RR wrote on January 16, 2016 - 5:22pm Permalink
The Renegade may be flashier and more fun to drive on road but I have taken my Patriot out into the wilds of Appalachian rocky, dirt roads, through some pretty deep water and over rocks and never had a problem. The Patriot get's just about the same mpg, is better priced and has a proven good reliability record (post the 2011 makeover). Seeing how long it took Jeep to get the Patriot right, I don't think that anyone need be in a hurry to get the Renegade nor should Jeep be in a hurry to retire the Patriot. The Patriot is still vastly outselling the Renegade and ended 2015 with sales up more than any other Jeep vehicle in the line-up. So really, the Patriot is the real star of 2015 for Jeep. Also, I like my vehicles to have a strong domestic content so that I'm not sending our dollars overseas but instead investing it in American union workers and their communities. I plan on getting another Patriot when I need to replace this one. My wife, on the other hand, plans on replacing her Patriot with a Renegade if and when the Renegade posts a good reliability record. Otherwise, she'll get another Patriot.
Stew wrote on March 1, 2016 - 11:26am Permalink
Sounds like you are comparing an FD1 Patriot or Compass to the trailhawk instead of the off-road oriented, and competitor to the Trailhawk, FD2. The FD2 provides MORE ground clearance than the Trailhawk (9.1 vs 8.7 inches), the same water fording, and hill descent control. The FD1 is the competitor to the Renegade Sport, Latitude, and Limited Renegades. It still offers more ground clearance than those (8.1 for the FD1 vs 7.9 for the non trailhawk AWD Renegades). They even come with the same tires. I like both of these, but honestly they are going to be VERY close in off-road ability when comparing comparable models.