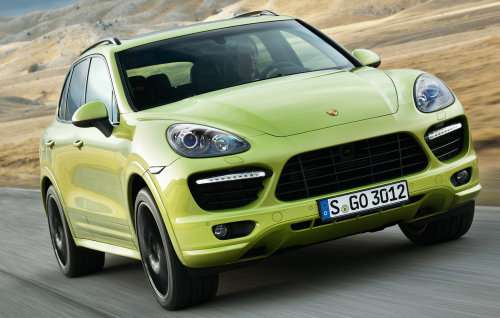 Porsche AG announced today that when the Beijing International Automotive Exhibition (aka Auto China) opens later this month, they will unveil their newest high performance SUV in the form of the 2013 Porsche Cayenne GTS.
Advertisement

The 2013 Porsche Cayenne GTS sits towards the top of the Cayenne family, ranking just under the highline Cayenne Turbo in both performance and price while sitting just above the Cayenne S Hybrid in price and the tradition Cayenne S in terms of performance. Like the Cayenne S, the Cayenne GTS is powered by a naturally aspirated 4.8L V8 sending power to all four wheels via a Tiptronic 8-speed automatic transmission with paddle shift control but unlike the S, the GTS offers 420 horsepower (@ 6,500rpm) and 380lb-ft of torque (@3,500rpm) – these are improvements of 20 horsepower and 11lb-ft of torque over the Cayenne S. The Cayenne GTS also features a lower final drive ratio (3.70) for improved acceleration compared to the 3.09. This allows the 2013 Cayenne GTS to move out from 0-60 in just 5.4 seconds while reaching a top speed of 162 miles per hour. For comparison, the Cayenne S will hit 160mph and it takes 5.6 seconds to reach 60 from a stop while the twin turbocharged, 500 horsepower Cayenne Turbo will get there in just 4.4 seconds and push a top speed of 172 miles per hour. This naturally aspirated V8 uses a dual exhaust system that exits the rear of the vehicle via 4 large, matte black exhaust tips mounted in pairs towards the outer edges of the vehicle – adding a rugged, sporty look to the rear of the ute.

Thanks to the auto start/stop system and the active all wheel drive system, the 2013 Porsche Cayenne GTS is able to achieve 15 miles per gallon around town and 21mpg on the open road. These aren’t the best numbers in the world but honestly, if you are buying Porsche performance SUV, there is a good chance that you aren’t too terribly worried about fuel economy. Actual fuel economy numbers will be announced by the EPA closer to the date of the US launch.

Helping to ensure that the 2013 Cayenne GTS handles like a proper Porsche, the 4,600 pound sport utility vehicle has been lowered by 20mm and fitted with the three-mode Porsche Active Suspension Management system. Combined with the lightweight 20” aluminum wheels wrapped in high performance rubber and a performance brake package that adds 6 piston calipers up front, 4 piston calipers in the rear and massive rotors all around – the Cayenne GTS should handle and stop every bit as well as it accelerates.

While the 2013 Porsche Cayenne GTS adds performance in almost every way, there are also physical changes inside and out to support the sporty nature of this true Sport utility vehicle. On the outside, the GTS wears the unique SportDesign package that adds an aggressive front and rear fascia, deeper side skirts, wheel arch flares and a dual level rear spoiler – all of which add as much attitude as they do aerodynamic properties. On the inside, the GTS features race inspired sport seats wrapped in plush Alcantara with optional embroidered GTS logos and 8-way power controls. There is also an optional sport chrono package that adds a lap timing system in analog and digital form to the center stack for those who plan to spend some time on the track with their new Porsche SUV. Finally, the 2013 Cayenne GTS is available in two unique color choices - Carmine Red or Peridot Metallic – and those colors appear inside and outside of the vehicle.

The 2013 Porsche Cayenne GTS carries a starting price of $82,050.00, putting it about $17,000 higher than the Cayenne S but more than $25,000 less than the top of the line Cayenne Turbo. We can expect that the Cayenne GTS will begin hitting the streets later this summer or in the early fall, following the formal introduction to the new trimline in Beijing on April 24th.