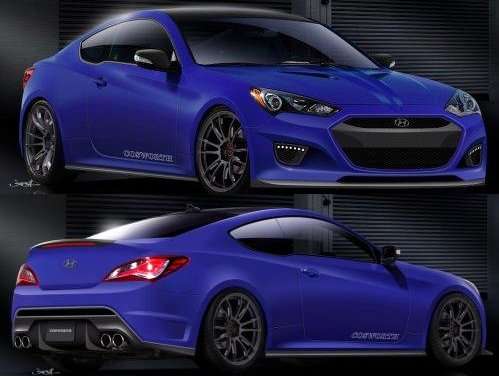 Hyundai’s decision to pull out of North American motorsports isnt going to prevent the Korean automaker from putting together an impressive display at the 2012 SEMA Show in Las Vegas with the newest teaser offering us a look at the Cosworth Genesis Racing Series Coupe – the second tuned up Gen Coupe to be previewed ahead of the big show.
Advertisement

The Cosworth name is well recognized around the world for their efforts in the world of racing as well as offering their own high performance versions of variance brands from around the world and it was that experience that led Hyundai turn to Cosworth to build a high performance version of the new Genesis Coupe for SEMA 2012. This modified Hyundai headed to SEMA has been named the Cosworth Genesis Racing Series Coupe with features inside, outside and under the hood to offer a unique look and improved performance capacities. The Cosworth Genesis Coupe joins the ARK Performance Genesis as the two models previewed by the booming Korean automaker.

The Cosworth Genesis Racing Series Coupe (CGRS) began its life as a 2013 Hyundai Genesis 3.8 Coupe fitted with a 6-speed manual transmission, offering 348 horsepower and 295lb-ft of torque in its stock form. However, Cosworth began their modifications under the hood; adding a Cosworth Intake and High-flow Exhaust system that allows for easier breathing along with an engine tune that allows the CGRS to make 389 horsepower and 325lb-ft of torque. Helping the CGRS to handle as well as it accelerates is a Cosworth-designed performance suspension setup and a big brake package.

On the outside, the Cosworth Genesis Racing Series Coupe features a dark blue hue with both gloss and satin finishes (although the renderings make it look like it is most satin blue). Cosworth then added a unique front fascia with integrated brake cooling ducts, a front splitter, carbon fiber side skirts, an integrated rear spoiler, a lower rear diffuser and lightweight racing wheels wrapped in high performance tires. There are also Cosworth logos and graphics around the outside. Interestingly, while the additions made by Cosworth on the outside go a long way in making this SEMA Show car look more aggressive – the majority of the body panels are the same as a standard production Genesis Coupe…helping to showcase how well the sinister look of the Genesis Coupe fits into the sports car world.

The Cosworth Genesis Racing Series Coupe will make its debut at the SEMA Show beginning later this month in the Hyundai booth and TorqueNews will be on hand to cover the event live – bringing you a closer look at the best and brightest of the huge show in the Las Vegas Convention Center.