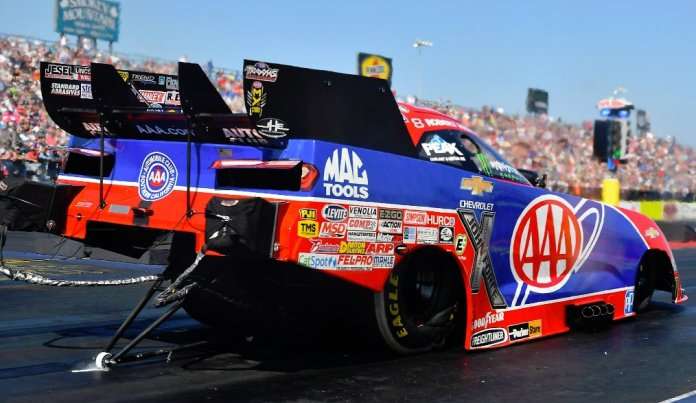 Robert Hight and his Chevrolet Camaro beat Ron Capps and his Dodge Charger in the funny car finals of the AAA Texas Fall Nationals, giving Hight his 4th win on the season, but Capps and his Mopar race car are still in the top spot in the championship chase with just two races left.
Advertisement

Coming into this past weekend’s AAA Texas Fall Nationals, Ron Capps and Robert Hight were locked in a tight battle for the 2017 funny car championship, with Capps and his Charger ahead of Hight and his Camaro by just 46 points. The Fall Nationals were the 4th race in the 6-race shootout to the championship, with Hight winning the 1st race and Capps winning the next 2.

Hight evened up the chase-race-win in Texas, beating Capps in a great final round run, but the Dodge Charger still holds a lead of 24 points with 2 races remaining.

Qualifying
The 1st round of qualifying for the AAA Texas Fall Nationals wasn’t a great one, with only five cars making solid runs. Jack Beckman and his Dodge Charger were the quickest in Q1 with a 3.914 while Courtney Force and her Chevrolet Camaro were the next-quickest, making them the only drivers in the championship chase group to turn in decent runs in the 1st round of qualifying.

Things got a little better in qualifying round 2, with Ron Capps running a 3.872 to jump up into the top spot, but Beckman ran quicker as well to hold onto the 2nd spot. Jonnie Lingberg and Tommy Johnson Jr also both turned in good Q2 runs to move into the top 8, but the majority of the funny car heavy hitters were stuck in the bottom of the order.

That would continue for the most part through the 3rd and 4th rounds of qualifying, with the exception of Robert Hight, who drove his Chevrolet Camaro to the top of the ladder with a 3.871 at 332 miles per hour – barely edging out Capps who qualified with a 3.872. As a result, Hight was in 1st, Capps was 2nd, Beckman was 3rd, Jonnie Lindberg was 4th and Tim Wilkerson was 5th headed into eliminations.

In round #2, Robert Hight beat Alexis DeJoria, Wilkerson beat Lindberg, Capps beat John Force and Jack Beckman beat Daniel Wilkerson, setting up a Mopar –vs- Mopar battle on one side of the bracket and a Camaro –vs- Mustang battle on the other side.
Robert Hight and his JFR Camaro beat Tim Wilkerson on the tree and got down the track quicker, easily advancing to the finals while Ron Capps used a starting line advantage to knock off teammate Jack Beckman – setting up another final round matching between a John Force Racing Camaro and a Don Schumacher Racing Charger.

In the finals, Capps pulled a better reaction time and grabbed an early lead, but Hight drove around him on the big end to take the win in a great side by side drag race.

Championship Standings
With the win in Texas, Robert Hight has closed the gap to leader Ron Capps to just 24 points, with Courtney Force in 3rd (171 points back), Jack Beckman in 4th (-186) and Matt Hagan is 5th (-226).

There are just two races left in the 2017 NHRA season and it looks like the funny car champion is going to be Ron Capps in his Dodge Charger or Robert Hight in his Chevrolet Camaro. If Capps can finish ahead of Hight in the final two races, he is practically a lock for the title, but if Hight can pull off a couple more wins – the title could be his.

LG's New EV Battery Plant Is a Welcome News for Tesla
Tesla Giga Berlin's New Hurdle: It's Not Only the Gov't, but Now Tesla Itself
END_OF_DOCUMENT_TOKEN_TO_BE_REPLACED