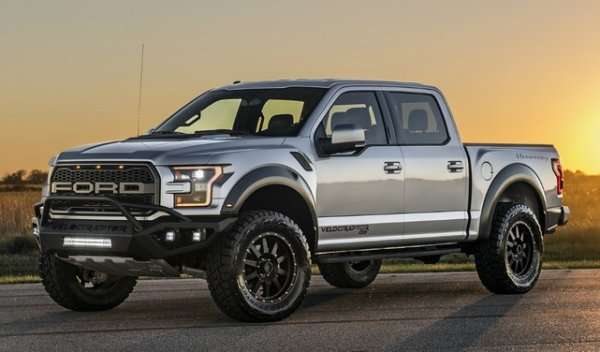 The 2017 Ford F150 Raptor is the most powerful factory-built half-ton F-Series of all time, but for those Raptor owners who need far more power, the folks at Hennessey Performance have you covered with their new VelociRaptor 600 package – which lifts the output of the 3.5L V6 from 450 to 605 horsepower.
Advertisement

When Ford Motor Company introduced the 2017 F150 Raptor, they also introduced a new EcoBoost engine, a new 10-speed automatic transmission and a new all-wheel drive system – all of which work together to make the 2017 Raptor the most powerful, the most capable and the most technologically advanced Ford F150 ever. With 450 horsepower and 510lb-ft of torque, the new Raptor is also the most powerful application of EcoBoost technology shy of the new Ford GT supercar, so in a variety of areas, this new Raptor Ford’s best half ton truck to date.

However, the truck owners market is chock full of folks who are always looking for more power, and for those people, Hennessey has introduced their VelociRaptor 600 package.

Those numbers sound nice, but the real world performance numbers sound even better, as the 2017 Hennessey F150 VelociRaptor 600 is able to dash from a stop to 60 miles per hour in just 4.2 seconds while running out to the quarter mile in just 12.9 seconds (and at 110mph).

The Hennessey VelociRaptor 600 package makes for one mean machine, but this 600+ horsepower F150 Raptor upgrade doesn’t come cheap. The package with installation starts at $22,500 on top of the base price of buying the new Raptor from Ford. Thee Raptor starts at $50,155, so the least you can expect to pay for the 605hp VelociRaptor 600 is $72,655. That is a big price tag, but when you consider that you will be paying that for one of the quickest trucks on the road – it isn’t a hard price to swallow.

Those VelociRaptor 600 buyers who want the more muscular look of the F150 at the top of this piece can add the Off-Road Package for $12,995 – which includes heavy duty front and rear bumpers, LED lighting, a 3” lift kit and 20” Hennessey wheels wrapped in 35” Toyo tires. When you add this package to the base price of the VelociRaptor 600 mentioned above, you get an MSRP of $85,650.

Hennessey will only build 100 examples of this new VelociRaptor 600 on the 2017 Ford F150 Raptor, so that price tag also includes a solid level of exclusivity.