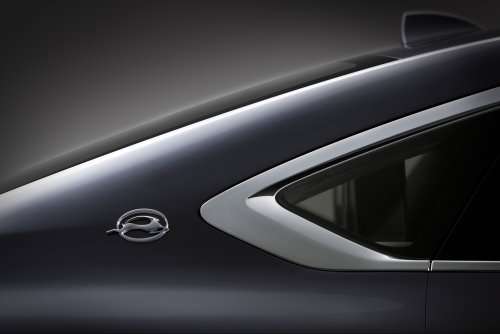 GM teases the 2014 Chevrolet Impala ahead of NY debut

General Motors recently announced that the 2014 Chevrolet Impala would be getting a refresh that would include being built on the new Cadillac XTS sedan’s Epsilon II platform and today, the General has issued a first teaser image of the new full sized Chevy sedan.
Advertisement

The 2014 Chevrolet Impala is expected to be bigger and roomier than the outgoing models, with an upscale design borrowed from the Cadillac XTS premium luxury sedan. Like the XTS, the 2014 Impala will most likely be powered by the 3.6L V6 engine found in nearly every vehicle General Motors sells, sending at least 300 horsepower to the front wheels via a 6-speed automatic transmission. The Cadillac XTS will be offering an all wheel drive option so perhaps the new Impala will also offer a more sure-footed drivetrain to compete with the likes of the AWD Dodge Charger.

“The momentum at Chevrolet continues to build with the debut of the 10th generation of the Impala, one of the brand’s most enduring and cherished nameplates,” said Chris Perry, vice president of Global Chevrolet Marketing. “The new Impala further strengthens Chevrolet’s passenger car lineup by giving consumers a full-size sedan that balances the desire for distinction with engaging driving dynamics.”

The teaser image of the 2014 Chevrolet Impala released today doesn’t show us much but we do get a good look at the rear roof pillar that runs smoothly through the backglass while the side windows feature a new angular end in place of the squared off rear-most side window on the current Impala models.

The side windows of the 2014 Chevrolet Impala are not surprisingly trimmed in chrome with the familiar jumping Impala logo on the thick rear pillar. Based on this image, it looks as though the 2014 Impala will have a much sleeker roofline that may crest closer to the middle of the car while still offering plenty of headroom for rear riding passengers. If the 2014 Impala shares the roofline with the 2013 Cadillac XTS, that means we can expect a nice short trunk line that still affords gobs of trunk.

Click here to read more about the trunk space of the new Caddy XTS.

With the introduction of the 2014 Chevrolet Impala, General Motors has almost entirely revamped the Chevy passenger car lineup over the past two years with the only exceptions being the Corvette (introduced in 2005) and the Camaro (introduced in 2009). The 2013 Malibu and the 2014 Impala join the Volt, Cruze, Sonic, and Spark in the refreshed lineup while the Corvette and Camaro soldier with as much popularity as ever.

The 2014 Chevrolet Impala is set to make its formal debut at the 2012 New York Auto Show but with that event almost a month away, perhaps GM will offer up more insightful teasers over the next few weeks.