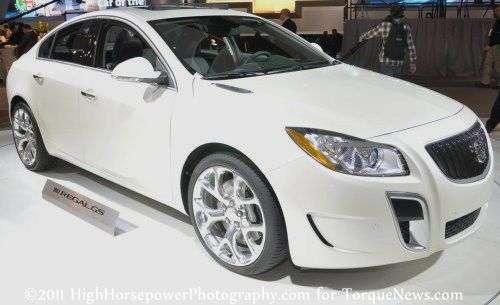 GM slips from the top spot in March 2011 US sales

General Motors had a pretty good month in March 2011 with all of their American brands showing gains compared to March 2010 but in relation to the rest of the industry, GM ranked second to last in growth rate above only Toyota – dropping below Ford Motor Company in total US sales.
Advertisement

General Motors moved 206,621 units between Buick, GMC, Chevrolet and Cadillac last month but with Ford Motor Company selling over 6,000 more vehicles than that, GM dropped to second in total US sales. The General still has a healthy lead in monthly sales over third place Toyota, who was the only company to decline in March and with the impact of the recent disasters in Japan, Toyota could continue to slide. While the folks at GM are likely not happy about seeing cross-town rival Ford claim the top spot, all four of the GM brands showed growth last month as the automaker continues to see numbers grow.

Buick was the strongest brand from GM in terms of growth, with 15,662 units sold accounting for an improvement of 21% over last March. Although Buick saw a strong brand increase in sales, it was due mostly to the 2011 Regal moving 3,643 units. The LaCrosse was the vehicle that Buick was relying heavily upon for months but things have slowed for the full sized model, as sales of the LaCrosse dropped by 20% last month. The Buick Enclave also saw a gain in March 2011 with 4,899 SUVs sold bringing a 8.4% gain while the aging Buick Lucerne saw sales drop by 4.2% - with 2,282 units making this model the slowest selling in the lineup.

Chevrolet was next in line for GM in terms of growth percentages, with 148,197 units sold giving the bowtie brand an increase of 11.2% from last March. As usual, the Silverado pickup was the brand’s top seller with 32,555 units sold (an 8.9% increase over last year) while the Impala was second with 18,063 and the new Chevy Cruze was a very close third with 18,018 units of the sporty compact sold.

The strongest vehicle in terms of growth from Chevy was the Express van, which saw an increase of 46% with 5,851 units sold and the Colorado pickup was next with 2,561 trucks accounting for a gain of 25% over the same month in 2010. March did bring another month where the Chevrolet Camaro outsold the Ford Mustang and Dodge Challenger and the Chevrolet Volt outsold the Nissan Leaf as the muscle car and super-green sedan continue their segment sales dominance of 2011.

GMC was the third strongest brand in terms of March 2011 growth for GM with 30,597 trucks and SUVs bringing the “official vehicle of the NFL” a gain of 10.6% over last year. With 11,622 trucks sold, the GMC Sierra family was the brand’s bestselling model while the full sized Yukon leading the brand in growth with 2,671 SUVs accounting for a gain of 24.7 over last March. The Terrain was second in both sales volume and growth rate with 6,301 compact SUVs bringing the company 29% better sales in March 2011 than 2010.

Cadillac was the worst brand from General Motors in terms of growth but the good news is that the luxury brand still showed positive growth of 4.5%. The sporty SRX crossover lead the way in terms of volume with 4,221 units sold last month but the CTS lineup was the top Caddy in terms of growth with just shy of 4,000 vehicles sold offering a gain of 36% over last March. Cadillac should benefit from some new models like the premium XTS sedan or the new entry-level ATS sedan in the near future but with neither of these vehicles making an official production debut thus far, it is questionable as to when these new models will reach dealerships.

General Motors has put a great deal of effort into improving the fuel economy across their entire lineup and as fuel prices continue to rise as we enter springtime, it will be interesting to see how the consumer market responds and how buying habits change. At the same time, analysts expect to see the full force of the Japanese disasters hit the US market sometime this month or next and when that happens, it will be interesting to see which automakers have leveraged themselves to prevent part shortages.