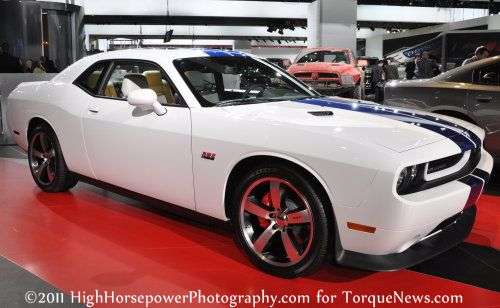 March sales numbers are in and with a gain of 31%, the Chrysler Group leads the US auto industry in terms of year over year sales growth among major automotive groups.
Advertisement

The Chrysler Group posted a 31% improvement, bolstered by the arrival of the company’s 2011 models and the re-introduction of the Fiat brand to North America. The next closest auto company was Nissan with a 27% improvement over March 2010 and American Honda rounded out the top 3 with a 23% gain. Chrysler trailed a handful of single-brand automakers like Saab, Mitsubishi (surprise!), Mazda, Kia and Hyundai but the folks under the Pentastar were tops among the auto groups – most importantly including cross-town rivals General Motors and Ford Motor Company.

The Dodge brand was the top performer in terms of growth during March 2011 from the Chrysler Group with an improvement of 49% over the same month last year. The Dodge cars, SUVs and minivans were the biggest benefactors of this “refresh of 2011” and as those new models are reaching dealerships, the consumers are responding. Technically, the strongest model in terms of growth was the awesome new 2011 Durango which moved 4,392 units last month. The Durango only sold one unit in March 2010, which means that the new sport ute posted a gain of 439,100% but among the reasonable figures, the refreshed Dodge Avenger was the strongest grower in March. The Avenger’s 5,954 units sold accounted for an improvement of 92% over last year, followed by the 2011 Dodge Charger with 8,986 sedans sold (a 44% gain) as the family-sized muscle car was almost able to overtake the Caravan as the brand’s top seller. The Caravan lineup moved 9,560 units for a gain of 23% and the Dodge Challenger had another strong month, coming just shy of 4,000 cars sold in March.

The Jeep brand was the next best in terms of March growth with a gain of 36% lead by the compact Patriot with 5,602 compact SUVs accounting for a 109% improvement over March 2010. The Jeep Compass was second in terms of sales for the Jeep brand with 3,703 units giving the Compass a 108% gain and the top-selling Grand Cherokee was third with a 64% improvement via 9,836 SUVs sold in March.

The Ram truck brand was next in line for the Chrysler Group, with a jump of 24% over March of 2010. Until the new Caravan-based Ram C/V hits showrooms around the country, the Ram brand is relying just on the Dakota (which will soon see an end to production) and the Ram lineup…but that isn’t stopping the Ram brand from showing growth. The Dakota was the top model in terms of growth with a 45% improvement coming via 1,612 units sold and the Ram pickup moved 21,898 units for a 23% gain.

The Chrysler brand was the smallest of the Chrysler Group in terms of growth with just 3% more vehicles sold in March 2011 than March 2010 but the good news is that the “new” 2011 Chrysler 200 moved 6,750 units – making it one of the entire Group’s top selling cars. Every other model in the Chrysler lineup saw an extensive decline in numbers which shouldn’t come as a huge shock, considering that the Chrysler 300 and Town & Country minivan are the only other two existing models. The Chrysler minivan sold 9,471 units to lead the brand but that accounted for a drop of 17% compared to last March and the brand’s flagship 300 sedan suffered as consumers appear to be waiting for the new 2011 models. As more of the great looking 2011 300s reach showrooms, we can expect to see the 300 show positive growth numbers over the next few months.

Finally, the Fiat 500 saw its first 500 units delivered last month to the lucky people who pre-ordered the special edition vehicles. Over the next month or two, Chrysler hopes to see more Fiat dealerships reach full speed as the normal production 500’s begin to hit the road.