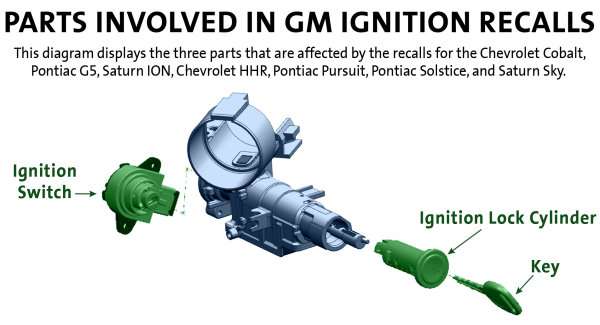 GM Recalls 2.2 Million of the Same Small Cars for Another Ignition Related Issue

General Motors has been dealing with the backlash from their slow reaction to what has proven to be a deadly recall problem, but this new GM ignition recall is not technically related to the recalls that have forced GM CEO Mary Barra to face the US government. The initial recall was focusing on the problem of cars shutting off while being driven while this new recall of 2.2 million small cars focuses on the fact that you may be able to pull the key out of the ignition without first turning it to the off/lock position.

Since these two problems affect many of the same vehicles, these 2.2 million recalled vehicles are not newly recalled, as they are all included in the initial recall problem.

In short, the 2.2 million small cars affected by the most recently announced recall were already included in the large number of vehicles recalled due to shutting off while being driven so the actual number of cars recalled by GM isn’t increasing due to this recall. The first recall pertained to the Ignition Switch shown in the image above while this new announcement pertains to the Ignition Lock Cylinder in the image above.

In this new announcement, GM states that they have received hundreds of complaints of people being able to remove the key from the ignition with the key in the “On” or “Run” position. Why does this matter, you ask? Well, to remove the key from a properly functioning ignition, you have to first put the car in park and then turn the key to the lock position to remove the key from the cylinder. If the car does not require you to first shift the transmission into Park before turning the key to the lock position, you can essentially stop the car and shut it off without shifting into Park. That means that your car could be in a gear where it will be able to roll away and cause an accident and/or injuries.

In fact, GM does have one report of a rollaway incident that resulted in a crash and an injury.

The 2.2 million vehicles included in this portion of the ignition recall are the 2003-2007 Saturn Ion, the 2005-2010 Chevrolet Cobalt, the 2006-2010 Pontiac Solstice, the 2007-2010 Pontiac G5, the 2007-2010 Saturn Sky and the 2006-2011 Chevrolet HHR. All of these vehicles are included in the previous GM ignition recall so if you own one of these vehicles and you have not yet had it serviced under the previous recall, the repairs for this recall will be performed at the same time. If you are one of the people who has already had your ignition fixed to prevent it from slipping from the Run position while driving, you will likely need to make a trip back to the dealership so that they can replace the ignition lock cylinders and, if needed, reprogram your ignition key.

Like all other recalls, this work will be performed free of charge and it is best when speaking with the dealership about either of these two ignition recalls to ask if your vehicle is also subject to them both.

Other GM News:
GM's Boy's Club has Thrown Mary Barra to the Government Wolves
GM Recalls Another 1.3 Million Cars for Steering Failures
These 10 Points Explain What Consumers Need to Know about the GM Recall
Toyota's $1.2 billion recall settlement could be worse news for GM