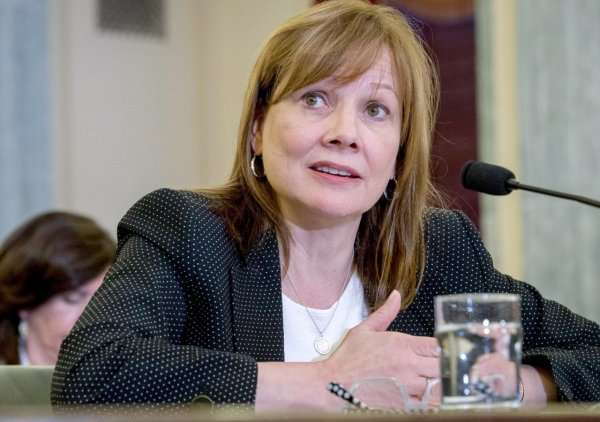 There was much jubilation when it was announced that Mary Barra was named the first female CEO of a major global automaker – making her the most powerful woman in the world – but as Barra has become the face of the GM ignition cylinder recalls, it looks more and more each day like the “boy’s club” at GM has offered her up to be sacrificed for the mistakes of past company leaders.
Advertisement

It is no secret that the auto industry is one ruled predominantly by men and while there have certainly been other high ranking women in the automotive world; none have climbed to the level of General Motors’ Chief Executive Officer like Mary Barra. Her introduction as the first Queen of GM was met with much excitement as she had done what no woman in the industry before had done. For the first time ever, we would get to see an experienced woman lead one of the biggest automakers in the world as they climbed out of the grip of government control through the bailout loans. Unfortunately, the excitement over Barra’s introduction has faded quickly as she has been tasked with guiding the company through the ignition cylinder recall problems and while some people are calling this baptism by fire – I view it more as the men of GM throwing her to the wolves. Barra has been left to defend the company because the men who had previously run the company didn’t have the guts to do so.

Now that information has surfaced showing that the boys in the General Motors front office knew about the ignition cylinder problems in millions of small cars years ago, it is obvious that previous CEO Dan Akerson knew about these problems when he stepped down. Akerson also had to know about the growing number of accidents and injuries stemming from this problem, and he had to know that sooner or later the problem would come to the surface. He also undoubtedly knew that once all of this information got out – there was going to be a firestorm over whoever was in charge of GM at the time. Akerson left his post sooner than many people expected and it is impossible to believe that Akerson didn’t leave with some haste to avoid being the target of the impending inquisitions on Capitol Hill in which Barra has been the target of the bulk of the blame.

Throughout the media world, Mary Barra has become the face of the GM ignition recall problems. She is the person who had to sit in front of the group of elected liars who we so lovingly call Congress and be reprimanded for decisions made well before she had any control or power over the situation. She may have known about these problems years ago – like so many other high ranking GM management team members – but she most certainly doesn’t have the level of responsibility that is being placed on her shoulders by both the mainstream media and the US government. In my opinion, it is just plain wrong that Mary Barra has basically become the person being blamed for the fact that GM didn’t act more quickly on this mechanical failure.

It was the GM boy’s club of top ranking leaders who knew about this years ago and opted to do nothing about it in order to save a buck. Even when Toyota was issuing recalls and facing unprecedented fines, the previous GM CEO’s made the decision to sweep it under the rug and when the problem began to really get to the point where it couldn’t be hidden anymore – they offered up Barra to be crucified by the government and the media while becoming “the face” of this whole problem.

What started out as jubilation over the first female CEO of a major automotive corporation has turned out to be a public flogging for Mary Barra after the men who came before her didn’t have the brass to stand up and face the music like real men. Hopefully once this is all said and done (which will likely take years), Mary Barra will have a real chance to lead the company through something other than a painful cleaning of the mess created by the men who led GM before her. In the meantime, it appears like Barra has been offered up by the men who call the shots to be the whipping girl for a situation over which she had no real control. Congrats to Barra for being tough enough to deal with the mess that she didn’t create – a mess that the men who did create it didn’t have the marbles to clean up on their own.

John Goreham wrote on April 4, 2014 - 12:12pm Permalink
When you take the top job you take the responsibility. She worked at GM her whole adult life. Including the Old GM she now wants to blame. She was an engineer. She managed supply chains. Her dad worked at GM. I cannot feel bad for her because she is a female. Mark Ruess wakes up every day looks in the mirror and thanks fate (and - or reverse gender bias) that he was picked as number two. He will take over as number one after she is gone. He too was is a lifer ,and I think his dad also worked at GM. I just wish Mary would come right out and tell congress to screw and remind them they bailed out this mess of a company. Any money GM pays out is taxpayer money anyway. So let's get on with the ritual sacrifice.
Realist wrote on April 12, 2014 - 2:01pm Permalink
I realize this article is old, but you can't possibly still believe this given all the evidence that has since come to light (and even just her resume). Right? Barra is not some neophyte plucked from the obscurity of middle management. She has been a high level GM executive for years and was earned of sudden losses in power sterling in the recalled cars that could cause crashes (the words of the engineering underling who warned her) back in 2011.