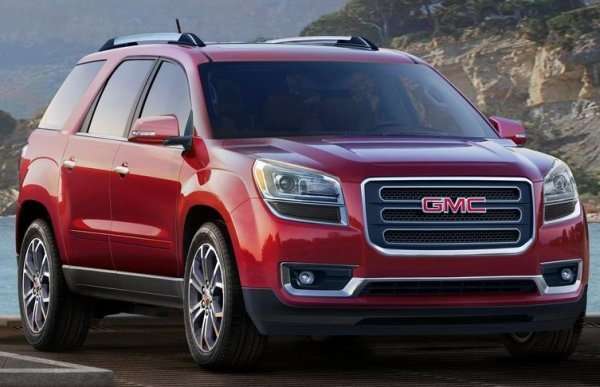 General Motors issued another massive recall this morning, this time calling back roughly 1.3 million units of their popular large sport utility vehicles because of a wiring issue that could cause the seat mounted airbags not to open – but there is an interesting catch with this recall.
Advertisement

First of all, General Motors has announced that they will recall 1.3 million SUVs around the world with 1.18 million of those being here in the United States while the other 120,000 are located in other countries. This recall specifically targets four of their popular SUVs including select Buick Enclave and GMC Acadia models from the 2008 - 2009 model years along with all of the Enclaves and Acadias from 2010-2013; select 2009 and all 2010-2013 Chevrolet Traverse units and select 2008-2009 Saturn Outlook units and all of the Outlooks from 2010.

In all of these SUVs affect by the recall, there is a side impact airbag system mounted in the outer side of the front seats which could malfunction due to a faulty connection in the wiring harness. Should the seat mounted airbags malfunction, there is an Service Airbag warning light that will light up on the dash. All new vehicles are fitted with an airbag problem light on the dash that lets the driver know that there is some kind of problem with the safety restraint system, but many people ignore those lights and that is where this recall gets interesting.

Should there be a problem with the airbag systems in these 1.3 million General Motors SUVs, the light that instructs the owner or driver to head to the dealership for a checkup will illuminate as expected. There is a problem with the system and the airbag light in the dash indicates thusly. Unfortunately, so many consumers ignore the warning lights on the dash and ignoring the airbag system light in the Buick Enclave, the GMC Acadia, the Chevrolet Traverse and the Saturn Outlook could prove to be deadly in the event of a severe side impact. Because so many consumers ignore those lights, General Motors has been forced to issue this recall rather than relying on the owners to bring their vehicles in for repair on a case by case basis when the airbag system check light comes on.

Once the owners of these 1.3 million GM sport utility vehicles are contacted and asked to return to their local dealership, a technician will inspect the wiring harness for the seat mounted side impact airbags and, if need be, they will perform service to the connections to ensure that the airbag system works as expected. This problem is really as simple as a connection issue that triggers a warning light, but in the age of warning lights that often mean very little (like a Check Engine Light caused by a loose gas cap), GM had no choice but to recall these vehicles.

When combined with the recent fuss made about the problematic ignition switches in the popular General Motors compact cars, this recall looks pretty bad. However, this recall is more about the company showing that they do take safety issues seriously and any responsible owner with any of those SUVs listed above will be able to prevent any sort of injuries or increased risks in side impact accidents by simply paying attention to the warning lights on the dash.

James Nuchols wrote on June 9, 2017 - 10:29am Permalink
I haven't received a recall notice on this. Thank you for letting me know.