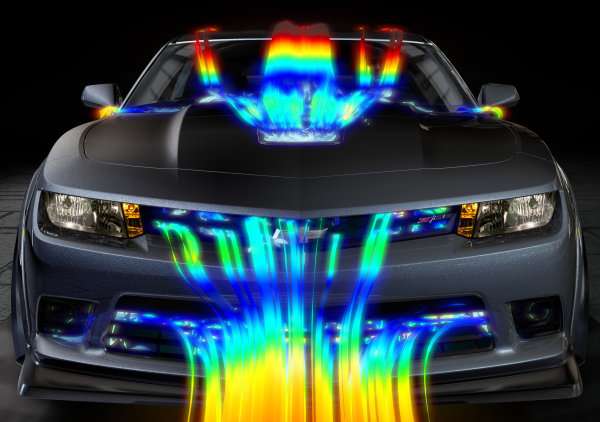 While the $75,000 price tag and the limited quantities of the Chevrolet Camaro Z/28, there will likely be some folks who cannot acquire the real thing who will try to make a more affordable trimline of the Camaro look and drive like the Z/28 – but GM isn’t going to make it easy for dreamers to build a knock-off of the new super-Camaro.
Advertisement

Throughout the history of the auto industry and across the entire automotive culture owners have modified their vehicle to look or perform like some other version of that same vehicle, from Japanese sport compacts to off road pickups to American muscle cars. When the 2014 Chevrolet Camaro Z/28 was introduced with a collection of body bits, braking components, suspension goodies and other goodies that help to make it the most track capable Camaro of all time, Camaro owners began drooling over the looks and the performance capabilities of this new super muscle car.

While a great many of these dreamers don’t have the money or the connections to buy one of the limited edition $75,000 muscle cars, Camaro owners will most likely look to acquire the components of the Z/28 that make it so special in order to make their Camaro LS, LT or SS look and/or handle like the new Z28. These knock-offs are commonly called “clones” and to help protect the exclusive nature of the new Z/28, General Motors will restrict the sales of the Z/28-specific components at dealerships around the country.

A full list of the Chevrolet Camaro Z/28 components that will be placed on sales restriction is available below with part numbers, but for those who aren’t skilled at reading dealership jargon – a quick overview of what GM won’t allow dealerships to sell anyone who doesn’t own a new Z/28. The braking assembly components, the unique front and rear fascias, the wheels, the wheel opening flares, the rear spoiler, components of the driveline including the differential components and half shafts, the steering wheel, the seats and the “Flowtie” logo on the grille are just a few of the items which will be restricted by GM through their parts departments. Realistically, outside of the LS7 engine and the transmission, it appears that most of the items that differentiate a Camaro SS from a Camaro Z/28 are on this list.

In order for dealership parts departments to order any of the components on this list for a customer or for repairs to a car in the service department, the dealership will need to provide GM with vehicle and owner information on the Chevrolet Camaro Z/28. This will prevent someone with a Camaro SS from walking into a dealership and ordering all of the body bits, suspension components or braking items to build a Z/28 clone – but the odds are good that people will still find a way around this.

If Chevrolet Camaro Z/28 owners are able to purchase components of their car, I can imagine that it is only a matter of time before some enterprising, opportunistic Z/28 owner will buy parts with the intention or reselling them. Due to the difficulty in getting these components, they will probably command a big markup so a Z/28 owner looking to make back some of that $75,000 might have a chance to cash in on this decision. Of course, the fact that these components are in demand, but are not available from General Motors will likely just drive the aftermarket to come up with their own versions more quickly…but GM is working to make sure that no one can build their own Z/28 without a whole lot of effort and expense.

Source: Camaro5.com - Thanks to Derrick for the tip on this one!