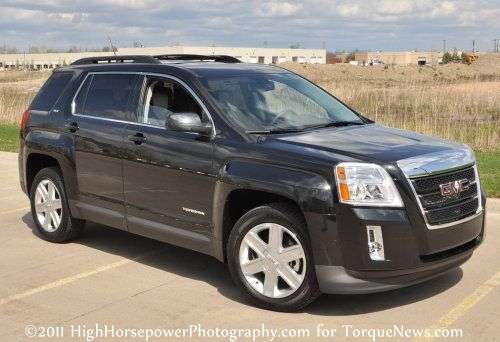 General Motors was once again the top selling automaker in the US market in September 2011, with 207,145 vehicles sold bringing the General an increase of 20% over the same month last year.
Advertisement

General Motors posted a gain of 20% over last September, placing them third among major automaker groups in the US market behind just Chrysler (27%) and Nissan (25%) as all four GM brands posted positive gains last month. Also, with 207,145 cars, trucks, vans and sport utility vehicles sold in September, GM found themselves once again atop the list of all automakers in terms of sales volume – comfortably beating out second place Ford by almost 32,000 units.

The hard working GMC brand was the top group from GM in terms of growth with an improvement of 28% in September 2011 over September 2010. The GMC Yukon XL and Yukon were the two top models in terms of growth with rates of 67 and 44.8%, respectively while the compact Terrain was third in growth at 44.7%. The GMC Sierra was, as usual, the top model from GMC in terms of sales with 13,904 trucks sold last month (an increase of 26%) with the Terrain placing second in sales with 6,910 units and the Acadia was third with 5,287 units sold in September 2011.

Chevrolet was the second strongest brand in terms of growth for GM with an increase of 22% last month but more importantly, with 147,611 vehicles sold throughout the month, Chevy ranked second in overall sales to only the Ford brand. The top model from Chevrolet in terms of growth is the full sized Suburban SUV with an increase of 83% followed by the Tahoe at 63% and the Express van with an improvement of 44%. The top model from Chevy in sales was the Silverado pickup family with a whopping 43,698 trucks sold last month; an improvement of 36%. The new Chevy Cruze was second in sales with 18,097 sedans sold and the Equinox was third in sales with 15,497 SUVs sold…and who says big trucks and SUVs are dead?

Buick was third in terms of growth with an improvement of 6% in moving 13,599 vehicles. Buick was lead in growth by the new Regal which moved 3,325 sedans for an increase of 87%, while the Enclave lead in overall sales with 4,868 SUVs sold; accounting for an increase of 10% over the same month last year. The Buick LaCrosse was second in sales volume with 4,338 sedans sold last month, although that accounted for a decrease of 9% compared to September 2010.

The Cadillac brand brought up the rear in terms of growth with an increase of less than 1% - 0.96% to be exact – but the important part is that an increase is an increase. The top Cadillac model in terms of growth was the Escalade with an increase of 26%, while the CTS family was second with a jump of 24% and the SRX was third as it saw sales grow by 22% compared to September of 2010. The SRX was the top model in sales with 4,901 units sold, followed by the CTS at 4,663 units and the Escalade with 1,527 large SUVs sold.

General Motors can only expect things to continue to improve, provided that the industry as a whole continues at this healthy rate. Over the next few months, GM will see new models like the Buick Verano hitting the market, offering buyers new low-priced options at GM dealerships around the country.