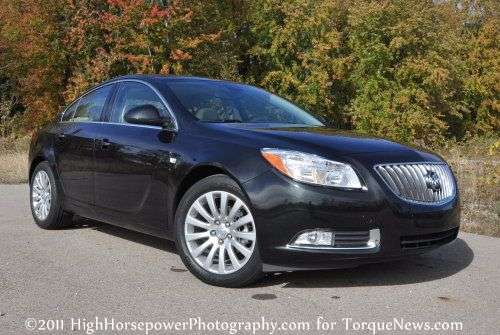 After a fairly weak March in terms of growth, General Motors broke out of their short slump in April 2011 with 232,538 units sold, giving them a year-over-year increase of 27% and the top spot in terms of growth and sales volume last month.
Advertisement

Buick was the strongest brand from GM in terms of April 2011 growth, with 18,413 vehicles sold accounting for an improvement of 51.2% over April 2010. The biggest news from Buick in April was the all-new Regal sedan (shown on the right), which moved 4,525 units last month. Since there were no Regals sold in 2010, there is no real growth rate but in shipping out over 4,500 new Regals, this European engineered sedan was a big part of Buick’s growth last month. The best vehicle in terms of growth was the Lucerne with 3,009 sedans accounting for an improvement of 28.3%, followed by the Enclave with 13.7% (5,230 sold) and the LaCrosse with 7.9% (5,649 sold). Things look good at Buick right now and with the new Verano based on the Chevy Cruze coming, an entry-level Buick should help the brand continue to grow in terms of sales volume.

The second best brand from GM in terms of sales was GMC for April 2011. The official sponsor of the NFL sent out 31,204 trucks and SUVs last month for an improvement of 28.8% over last year. The top vehicle in terms of sales was the Sierra pickup series, accounting for more than a third of GMC’s sales last month with 10,523 trucks sold. The compact Terrain was second in sales with just over 7,200 units sold and the Acadia crossover was third with just shy of 6,900 units sold. As far as growth from April 2010 to April 2011, the top performer was the Savana (it’s a cargo van) with an increase of 126.7%...although just 2,784 full size vans were sold last month. The Terrain was second in terms of growth was an increase of 63.6% and the Acadia was third with a gain of 41.7% over last year.

Next in line in terms of growth for GM was the Chevrolet brand with 169,794 units bringing about an improvement of 25.4% from April 2010 to April 2011. This sales volume also made Chevy the second bestselling brand, behind only Ford. As is usually the case, the top dog in terms of sales for Chevrolet was the Silverado pickup series but with the price of gas rising quickly, Chevy’s fuel-friendly sedans have made a strong comeback in April 2011. The Silverado’s 29,342 units sold is closely followed by the Cruze at 25,160, the Malibu at 24,701, and the Impala with 21,071. With over 25,000 units sold, the new 2011 Chevy Cruze has rapidly become one of America’s favorite models and this eco-friendly compact sedan is a big part of GM’s current growth. Aside from the Cruze, the growth was heavily bolstered by the Malibu’s 49.4% increase over last year and the Equinox’s 42.4% gain.

The weakest in terms of growth last month for General Motors was Cadillac, with the luxury brand moving 13,127 cars, trucks and SUVs for a gain of just 16%. I say “just” because that growth rate puts them behind many other brands in the US through April but the fact that the worst brand in terms of year over year growth was 16% better this year than last is a good sign for the company. The life of the Cadillac STS is scheduled to soon come to an end, perhaps spurring sales a bit with 887 sedans accounting for an improvement of 169%. The CTS lineup was second in terms of growth with an improvement of 28.7% (4,220 coupes, wagons and sedans) and the SRX was third with an increase of 12.2% in April 2011 over last year. The SRX was also the top model from Cadillac in terms of sales with 4,380 crossovers sold. Click here for the TorqueNews review of the 2011 Cadillac SRX.

Things are going smoothly at General Motors and the steady improvement in fuel economy across their brand and model lineup should help continue their momentum as gas prices soar.

LG's New EV Battery Plant Is a Welcome News for Tesla
Tesla Giga Berlin's New Hurdle: It's Not Only the Gov't, but Now Tesla Itself
END_OF_DOCUMENT_TOKEN_TO_BE_REPLACED