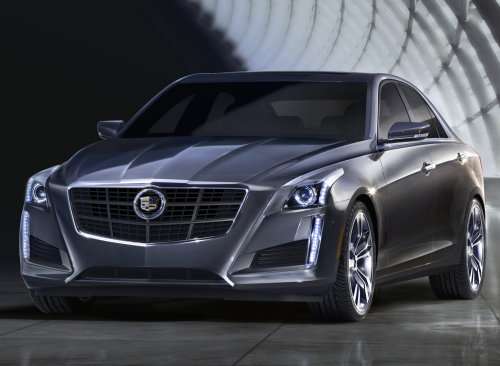 The 2014 Cadillac CTS will make its virtual debut later tonight but General Motors has announced a full spread of details on the gorgeous new midsized luxury sedan along with re-issuing the leaked images that we have drooled over these past two days with some shots that we had not previously enjoyed.
Advertisement

The 2014 Cadillac CTS release included a spread of images, almost all of which we have seen either in part or in their entirety. If there had been any speculation that the images that we have discussed each of the past few days were the “real deal”, this release from GM has confirmed that we have indeed been swooning over the next generation midsized Caddy sedan…and swooning for good reason. The redesigned CTS looks fantastic in images from every angle with a little bit of ATS, a little bit of XTS and a little bit of the Ciel Concept combining to create one great looking sedan that GM promises will challenge the world’s best luxury sedans. Click here for a look at the leaked images of the 2014 CTS with additional images of the interior and exterior.

2014 Cadillac CTS Dimensions
We have learned tonight that the 2014 CTS is 4.2 inches longer than the current model with a 1.2 inch increase in the wheelbase while sitting about an inch lower than the outgoing 2013 CTS. While the design of the new CTS gives the midsized sedan a low, wide stance, this car is actually 3 tenths of an inch narrower than the current CTS to make this bigger midsized sedan more comfortable in narrow city streets. Most importantly, Cadillac designers used a spread of aluminum components including the doors, the bumper reinforcements and other unspecified body panels to bring about a curb weight of just 3,616 pounds. This is 244 pounds lighter than the 2013 CTS base model while also being some 200 pounds lighter than a comparably equipped BMW 528i. Oh, and the 2014 CTS has a near perfect 50/50 weight distribution for supreme handling and ride quality.

The 2014 Cadillac CTS Drivetrain lineup
Aside from the good looks on the outside of the 2014 Cadillac CTS and the super high end interior – both of which we have talked about earlier this week – the official statement from GM clears up any questions on the drivetrain of the new CTS while officially introducing the brand’s first 8-speed automatic transmission.

The engine lineup for the 2014 Cadillac CTS begins with the turbocharged 2.0L 4-cylinder engine from the Cadillac ATS, sending 272 horsepower and 295lb-ft of torque to the wheels via a 6-speed automatic transmission. Unfortunately, there is no mention of a manual transmission option for the turbo 4 or any of the other 2014 CTS engines. The 4-cylinder engine can be fitted into a new CTS with either rear or all wheel drive with the rear drive 2.0L turbo models offering 19 miles per gallon around town and 30mpg on the highway while the all wheel drive turbo 4 models will offer 18mpg around town and 28 on the open road. (All fuel economy figures are company estimates – official figures will be announced closer to the arrival of the 2014 CTS in dealerships)

Next in line is the naturally aspirated 3.6L V6 that is already hard at work in the current CTS lineup with 321 horsepower and 275lb-ft of torque. Like the turbo 4, the less powerful of the two V6 options is available with either rear or all wheel drive but unlike the smaller engine, the naturally aspirated V6 comes with the new 8-speed automatic transmission. This engine, which will most likely be the 2014 CTS base engine, is expected to hit 19 miles per gallon around town and 28mpg on the highway in rear drive trim while the all wheel drive base model CTS should reach 18 in the city and 27 on the highway. This engine is also capable of towing 1,000 pounds…you know…for people who want to tow with their new Cadillac CTS.

Finally, the top of the line engine (so far) for the 2014 Cadillac CTS is the new twin turbocharged 3.6L V6. This engine provides 420 horsepower and 430lb-ft of torque with all of that power being channeled to the rear wheels via the new 8-speed automatic transmission. Along with dealing out the most driving excitement, this new twin turbocharged V6 will still offer the driver 17mpg around town and 25 on the open road. All wheel drive is not currently listed as an option for the twin turbo engine.

Introducing the new Cadillac CTS Vsport
The most exciting bit of news pertaining to the all new 2014 Cadillac CTS is the new Vsport package. The 2014 CTS Vsport serves as a preface to the future high performance CTS-V with the root of this package being the 420 horsepower twin turbo V6 and the new 8-speed automatic transmission. There is no mention of appearance changes for the Vsport (which would surprise the heck out of us if that is the case) but in addition to the high performance drivetrain, the CTS Vsport package includes unique 18” wheels wrapped in high performance tires, a steering setup with an increased ratio, a Brembo braking package with aluminum calipers and high friction pads, a heavy duty cooling system, a driver selectable track mode with unique tuning to both the Magnetic Ride Control system and the electronic steering system and an electronic limited slip differential.

There has been no indication on pricing for the 2014 Cadillac CTS lineup and realistically, we probably won’t get a full pricing sheet until much closer to the new sedan’s debut later this year. Production of the 2014 CTS is slated to begin at GM’s Lansing Grand River Assembly plant this fall with the first models hitting the streets before the end of the 2013 calendar year.