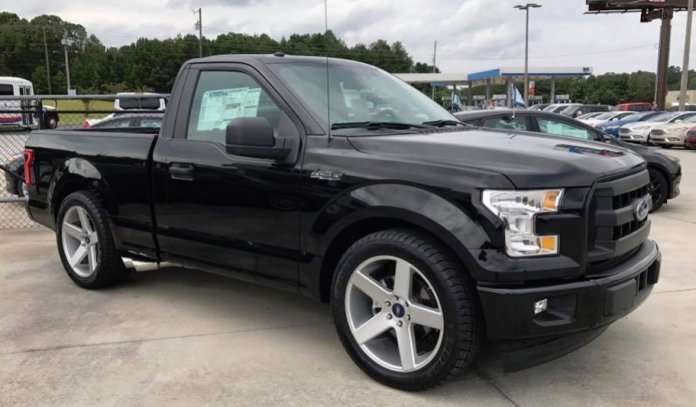 Ford Motor Company hasn’t offered an on-road performance variant of the F150 since the SVT Lightning left the lineup after the 2004 model year, but a Ford dealership in Georgia is offering their own Lightning tribute package with 650 horsepower – and it is priced right around $50,000, making it a smokin’ deal.
Advertisement

During the past few generations of the Ford F150, the only true performance package has been the Raptor, which is designed to conquer off-road situations at high speed. The F150 Raptor is a remarkable machine and it is, without question, the most capable off-road high performance truck in the modern era, but there are still plenty of Ford truck fans who are always hoping for a modern day F150 SVT Lightning.

If you are somehow unfamiliar with the Lightning, it was last offered for the 2004 model year and with a supercharged 5.4L V8 delivering 380 horsepower and 450lb-ft of torque, it was a half-ton pickup which would outrun most performance cars from that model year. The Lightning was a short cab, short bed configuration with rear-drive and few options, so it was the lightest possible layout for an F150 and when fitted with the supercharged V8 – the SVT Lightning was an incredible performance vehicle.

Sadly, the Ford F150 SVT Lightning left the lineup after the 2004 model year and despite rumors of a new on-road performance pickup, the Motor Company has stuck to dominating the off-road performance segment. However, a Ford dealership in Georgia has recreated the Lightning with the Pioneer Ford Lightning Tribute Ford F150 – a 650 horsepower pickup with a surprisingly small price tag.

The Pioneer Ford Lightning Tribute Ford F150
Before getting into the details of the Pioneer Ford Lightning Tribute Ford F150, I want to make sure that it is very clear that this is not a package offered by Ford Motor Company. This package is designed and built by this specific Ford dealership, so as opposed to what some people on social media are claiming – this is not something that you can buy at every Ford dealership.

The Pioneer Ford Lightning Tribute Ford F150 is designed and built by the folks at Pioneer Ford in Bremen, Georgia with the goal of recreating the 2004 SVT Lightning on the modern Ford F150. To say the least, their goal was achieved, as this truck is remarkably similar to the factory-built supercharged trucks from 2004, except this truck has a whole lot more power.

In addition to the supercharged engine, the Pioneer Ford Lightning Tribute Ford F150 features side exhaust (similar to the setup on the 2004 Lightning), sport tuned suspension and 22 inch wheels which are perfectly modeled after the 2004 wheels. Oh, the 650hp truck from Pioneer also has the same Lightning badges on the fenders which were found on the 2004 models, really making this dealership-built truck a perfect tribute to the last models built by the Motor Company.

Best of all, the truck above (which has already been purchased) has an MSRP of just $49,661 and it comes with the full factory warranty. This black truck is the second Lightning tribute built and sold by Pioneer Ford and they have plans to make one more for the 2017 model year before beginning their 2018 F150 Lightning Tribute models are introduced.

So, if you have been dreaming of a new SVT Lightning based on the modern Ford F150 pickup, you can’t go to your local dealership and order one – but you can call Pioneer Ford in Georgia to order one of their 650 horsepower super trucks.