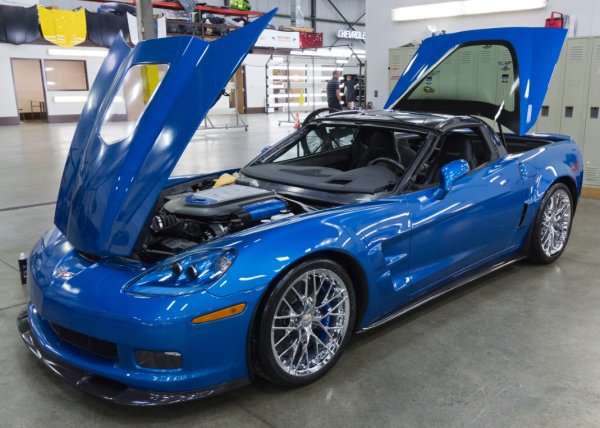 The first Chevrolet Corvette to be repaired after falling into the National Corvette Museum sinkhole is the 2009 Blue Devil ZR1 and as a surprise accompaniment to the highly modified new models at the 2014 SEMA Show – the good-as-new Blue Devil test car made its world debut before heading back to its home in Bowling Green Kentucky.
Advertisement

Early on the morning of Wednesday February 12th 2014, a sinkhole opened up under the floor of the National Corvette Museum’s Skydome exhibit, swallowing 8 historically significant Chevrolet Corvettes. One of the final cars to fall into the hole was the 2009 Chevrolet Corvette ZR1 test car, which came to be known as the Blue Devil. As the last car to fall into the hole under the Museum, it was the first to come out and it hadn’t sustained all that much damage since it didn’t have tons of debris and other cars piled on top of it once the smoke had cleared.

In fact, the Chevrolet Corvette Blue Devil was in good enough shape that once lifted to solid ground, it started and drove out of the Skydome. The Blue Devil Corvette was then moved to the new sinkhole exhibit, where it was on display with the rest of the vehicles (as they were exhumed) until GM had the 2009 Corvette ZR1 test car back to their Heritage Center for a full restoration.

“After that unprecedented event, the ZR1 was the first car to be lifted out of the sinkhole,” said Jim Campbell, U.S. vice president, performance vehicles and motorsports. “It was great to recover it, bring it back to Chevrolet and begin the restoration of this significant Corvette.”

The Damages to the Blue Devil Corvette
The 2009 Chevrolet Corvette ZR1 Blue Devil was the least damaged of “The Great Eight” cars that were swallowed by Mother Earth on February 12th…but it still had some significant damages that took it from being a pristine show car to a sad reflection of what had happened on that morning. The Blue Devil headed back to Warren Michigan on September and was under the knife for 6 weeks before it was repaired and driven out of the shop.

The Corvette repair experts at GM’s Heritage Center had to repair (or possibly replace) the carbon fiber ground effects package, the passenger side rocker panel, the passenger’s side front fender, both doors, the windshield, the glass in the hood that shows off the LS9 supercharger, the passenger side headlight assembly, the rear driver’s side control arm and the oil lines that help feed the LS9 dry sump oiling system. Once all of those components were repaired, replaced and painted the gorgeous metallic blue, it was shipped off to Vegas where it makes its grand debut this week at the 2014 SEMA Show.

The gallery above shows the 2009 Corvette ZR1 Blue Devil both after the sinkhole tragedy, during restoration and after the team had finished up the stunning 638hp Chevy supercar. Click any thumbnail above for a closer look at the Blue Devil ZR1 in its various stages.