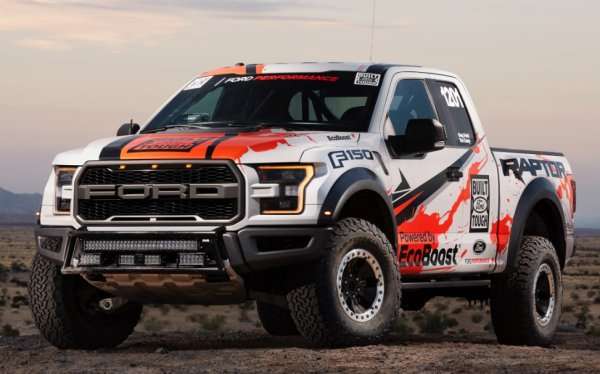 The production-spec 2017 Ford F150 Raptor campaigned by Greg Foutz Motorsports has finished the 2016 offroad racing season with flying colors and after being closely examined by the Ford Performance team in Detroit, this hard-run Raptor will be displayed at the 2017 North American International Auto Show in the Motor City.
Advertisement

The 2017 Ford F150 Raptor has similar expectations to the previous generation SVT Raptor, but rather than the proven drivetrain bits from the previous Raptor – including the 6.2L V8 and a 6-speed automatic transmission – the new Raptor relies on a handful of “unusual” mechanical components. Most notably, the V8 has been replaced by a new version of the 3.5L EcoBoost twin turbo V6 and the 6-speed automatic has been replaced by a new 10-speed gearbox.

Since it was announced that the 2017 F150 Raptor would rely on EcoBoost power sent through the new 10-speed gearbox, there have been critics who insisted that this drivetrain component won’t be ideal for a high performance pickup. To prove those folks wrong, Ford set up Greg Foutz Motorsports with a new production-spec F150 Raptor to campaign in a handful of key off-road races throughout 2016.

With the EcoBoost engine, the new 10-speed gearbox, the high performance suspension setup and the new advanced four wheel drive system, the 2017 Raptor “race truck” was able to finish some of the toughest races in North America.

“We didn’t slap our name on a trophy truck like other manufacturers do,” said Brian Bell, Ford Raptor marketing manager. “We ran a stock truck with full factory air conditioning, factory glass, AM/FM SIRIUS/XM satellite radio, the same engine and advanced off-road drivetrain and suspension that you’ll soon see at your Ford dealer.”

Raptor Races Through 2016
A while back, we talked about how the Greg Foutz Motorsports 2017 Ford F150 Raptor race truck had completed the Baja 1000, finishing 3rd in the Stock class and driving the crew 400 miles back to their shop after completing North America’s toughest off-road race. The Foutz Raptor finished that race with all of the key drivetrain components of a production road truck, in an event where 126 vehicles built specifically for off-road racing failed to cross the finish line.

More recently, Greg Foutz drove the 2017 F150 Raptor race truck to the finish line of the Pahrump Nugget 250 and while the results page from that series isn’t working right now, so I cannot check to see where in the field the Foutz Raptor finished – we know that this truck with production-spec components finished the race.

In total, during the course of the 2016 racing season, Greg Foutz logged 2,481 miles and spent more than 100 hours racing his 2017 Ford F150 Raptor race truck in some of the world’s most grueling conditions – and the truck finished those events when many full race vehicles did not.

The Modifications for Racing
While the Greg Foutz Motorsports Ford F150 Raptor competed in stock-based classes, there is a list of modifications required of a “stock” vehicle to compete in these types of events. A custom roll cage, racing front seats with racing harnesses, extra exterior lights, a racing fuel cell, an off-road GPS system and a race-ready instrument cluster with a datalogging system is required to compete and when you add all of those things, you also add weight, so the suspension setup of the Foutz Motorsports Raptor has been adjusted to accommodate that extra weight. There are also slightly taller springs for improved ground clearance, but other than the suspension bits – the mechanical components of this Raptor are production-spec…and those production components stood up to almost 2,500 miles of off-road racing over the course of 100+ hours.

Next Step for the Race Raptor
Now that the 2017 Ford F150 Raptor has completed the 2016 racing season, it will be shipping to the Ford Performance headquarters in Detroit for a full examination and once that has been completed – the truck will be moved over to Cobo Hall as part of a display for the 2017 North American International Auto Show.